Prototype pollution vulnerabilities are complex issues which can put your web applications and users at serious risk. Learn how these flaws arise and how Tenable.io Web Application Scanning can help.

JavaScript is a language implemented in nearly all web applications, from building rich client interfaces with frameworks like AngularJS to designing efficient backends using a NodeJS environment. For developers, there is a plethora of libraries available, and they are often used without any prior security assessment. Over the last few years, prototype pollution vulnerabilities have been discovered in many of these libraries, introducing serious security risks to applications utilizing them (see for example the security advisories issued for the Node Packet Manager packages). For example, the popular JavaScript library Lodash, used as a dependency by more than 140k packages, has been impacted by this bug referenced as CVE-2020-8203. From cross-site scripting (XSS) to remote code execution (RCE) attacks, malicious actors can conduct advanced exploitation scenarios with prototype pollution vulnerabilities.

In this post, we will cover the key concepts behind prototype pollution bugs, and how Tenable.io Web Application Scanning (WAS) can help you proactively identify these vulnerabilities.

Prototype-based programming is based on the process of defining objects called prototypes, which are then extended or cloned to create new objects. Once instantiated, these objects will carry over the properties and the functions of their prototype, as well as their local properties or functions.

JavaScript is one of the most commonly used prototype-based languages in modern web applications. Most of the JavaScript objects are derived from the Object class and share the same prototype called Object prototype. For example, a basic JavaScript object can be created with the following snippet of code:

This object is simple and contains only one property using the key “company” and the value “Tenable.” Once this new object is instantiated with its literal notation, it will be linked by default to the Object prototype.

Objects can also be instantiated by using a specific constructor function.

By calling this constructor function with the new keyword, the new object will then be instantiated.

The prototype of this newly instantiated object will be the one of its constructor function which is usually the Object prototype.

The inheritance between the objects and their prototype is called the prototype chain. Each time the code checks for a property of an object, the JavaScript runtime will first verify the properties of the current object and then go up the chain until it reaches the top level, which is usually the Object prototype.

The code below shows an attempt to access a property named “theme”, which is not declared in the object. The property is then set on the Object prototype and becomes available in the object through the prototype chain.

Prototype pollution vulnerabilities occur when the code of the application allows the alteration of any prototype properties, usually those of the Object prototype. By inserting or modifying a property of a prototype, all inherited objects based on that prototype would reflect that change, as will all future objects created by the application.

In the previous example, the following object was created:

The following code snippet accesses the Object prototype through its __proto__ property to redefine the basic toString() function, which returns a string representation of an object:

Now, each time the toString() function is called on this object, the console will display the ‘stop pollution’ message: 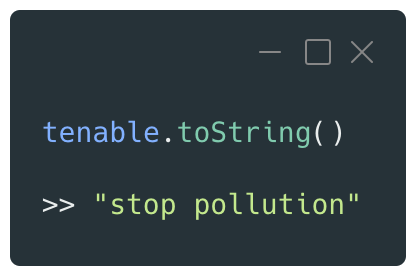 When creating a new object, the same behavior is observed, as it inherits from the Object prototype:

This short demonstration shows that being able to alter the properties of a prototype has an immediate impact on the code accessing and evaluating it.

JavaScript can be used on both the client and server side of a web application. Prototype pollution vulnerabilities exist in both of these contexts and can lead to a wide range of attacks depending on the application logic and implementation.

Most of the time, the first impact of exploiting this type of vulnerability is the ability to perform a denial of service (DoS) attack either on the web server hosting the application or against a targeted user in a client-side attack. Interfering with the JavaScript environment by adding or modifying a property can cause unexpected behaviors, with some logic not executing as intended.

Attackers often use prototype pollution vulnerabilities as a starting point for conducting further attacks on a targeted application. By leveraging the other components loaded in the same context (called Gadgets), the attacker can initiate more complex attacks in order to gain further privileges or access sensitive information.

The exploitation starts with the injection of a payload into an input that is used to build the client-side logic or rendering of the application. The most common source of input is the URL and its different properties, like location.search :

These types of parameters are a good example of a key-value data structure, where it is common to see URL parsers assign JavaScript objects properties from this type of string without verifying if the target property is correctly linked to the Object prototype.

The following vulnerable code, simplified for the purpose of this post, declares a function that takes a URL as an argument and returns an Object with the parameters and their values extracted from the query string.

The function is then called on a crafted URL which contains a payload to test for a prototype pollution vulnerability.

The return value is an empty Object, but the vulnerability is confirmed by looking at the Object prototype properties which now contains the “pollutedKey” property with the “pollutedValue” value.

The most obvious outcome of the exploitation of a prototype pollution vulnerability in a client-side context is the ability to perform a XSS attack. By identifying a gadget which will rely on a property of an object that can be polluted and interact with the document object model (DOM) of a page, it is possible to trigger client-side JavaScript code execution.

The current research around client-side exploitation also shows a specific use case leading to the bypass of some HTML sanitization libraries. These libraries maintain an allowlist of tags or attributes to be used in the various user inputs of the application to ensure that no malicious content can be submitted. By polluting specific properties, it is possible to modify the allowlist to enable further injection of payloads that could allow for XSS attacks.

Finally, prototype pollution vulnerabilities can also be used to defeat the protection of some web application firewalls (WAF) which would, under certain circumstances, sanitize specific characters to avoid XSS payloads, but may fail to identify JavaScript object pollution.

Server-side exploitation uses the same concept as client-side, relying on the ability to modify properties of the Object prototype using gadgets present in the application context. Because the JavaScript runtime objects executed on the server could be modified, the impact is often more severe and can leave an application open to critical vulnerabilities:

Exploiting this type of vulnerability can be complex, and requires a deep analysis of the application logic to be able to determine the impact of prototype pollution.

Use Tenable.io WAS to detect prototype pollution issues

There are multiple best practices available to protect applications and users and prevent prototype pollution vulnerabilities:

Performing continuous assessment of web applications and mastering the patch management process remain crucial to prevent these types of attacks from succeeding.

Rémy joined Tenable in 2020 as a Senior Research Engineer on the Web Application Scanning Content team. Over the past decade, he led the IT managed services team of a web hosting provider and was responsible for designing and building innovative security services in a Research & Development team. He also contributed to open source security softwares, helping organizations increase their security posture.

Interests outside of work: Rémy enjoys spending time with his family, cooking and traveling the world. Being passionate about offensive security, he enjoys doing ethical hacking in his spare time.