What is penetration testing?

Penetration testing tests your existing cybersecurity measures to try to find vulnerabilities that attackers could exploit. Pen tests give you insight into how attackers might try to breach your networks, so you can close any gaps and stay one step ahead.

Pen tests can be done in house, but generally they are done by a third party who uses a variety of tools and methods to try to penetrate your network. These tests resemble real-world attack methods attackers may use. The goal is to discover vulnerabilities, misconfigurations and other security weaknesses before an attacker can exploit them and put your organization at risk.

If an attack (or penetration from a pen test) is successful, the attacker could:

Pen tests help you uncover weaknesses within your attack surface so you can make plans to remediate them before they can be exploited.

To build a comprehensive vulnerability assessment program, you should conduct vulnerability assessment scans on a continuous basis and then do pen testing periodically. Some compliance guidelines call for annual pen testing, but you may build a stronger cybersecurity program if you conduct these tests more frequently—for example, at least quarterly.

The Importance of Pen Testing

Here are some reasons why your organization should adopt penetration testing as part of your comprehensive cybersecurity program:

Generally, there are five phases for penetration testing.

There are different approaches to pen testing, the two most common are whitebox testing and blackbox testing.

In whitebox testing, your organization will provide your tester with information about your intended target. Whitebox testing also generally takes place within a credentialed environment.

In blackbox testing, you don't share additional information about the target with your tester and the pen tester generally conducts network sweeps without using credentials.

Grey box testing is another approach to penetration testing. As the name implies, it’s somewhere in the middle of blackbox and whitebox testing. Here, your organization provides the tester with partial details about targets.

Nessus Professional is a great complementary tool for these approaches to penetration testing.

In addition to the approaches to pen testing, pen testers may utilize a variety of testing methods during an engagement with your organization. Here are some examples:

Targeted testing: During targeted pen tests, your internal IT teams work together with your third-party tester to try to breach your attack surface. During these types of tests, both parties share information about what the tester is doing to initiate the attack and how your team is responding to block it. Not only does this type of testing give you information about where you may have vulnerabilities, but it also gives your teams real-world experience in attempting to stop a hack while it’s happening.

Blind testing: Blind testing is a true-to-life hacking scenario where all the tester knows is your URL or your organization’s name and your teams are only aware that you’ve given the go-ahead for a test. Here, your tester attempts to gain access to your network and systems in real time with little-to-no additional information about your company or security posture.

Your organization should plan for regular pen testing. While some compliance regulations call for annual tests, you may find it more beneficial for your overall cybersecurity posture if you do them more frequently, for example, at least once each quarter.

Pen tests give you a point-in-time snapshot of your security posture. Since your attack surface constantly changes and expands, routine pen tests may help you find holes and gaps in your existing program and enable you to remedy them before an attacker can exploit them.

Vulnerability scanning is a component of penetration testing. It’s a way to discover vulnerabilities and weaknesses within your attack surface and can help testers uncover which ones to target during a test.

Vulnerability scans can span across your entire attack surface or the tester may be limited to a specific subset. Here are some subset examples, some of which may be included in specialized tests:

Penetration testing has long been a manual process that relies on the training, skills, and innovative thinking of testers to try to breach your attack surface. Today, however, testers are supported by an arsenal of automated tools to help them initiate tests on intended targets. One of them is Kali Linux.

Kali Linux has more than 600 penetration tools and is a free resource. It can be used for penetration testing, reverse engineering, tech forensics, and research.

Tenable Nessus is not installed on Kali Linux by default, but it can be easily installed and then used to support pen testing engagements. Nessus can help your pen tester find local and remote vulnerabilities, check for default credentials, assist with configuration and compliance audits, and do web application scanning. You can read more about how Nessus supports Kali Linux pen testing here: https://www.tenable.com/blog/getting-started-with-nessus-on-kali-linux.

Nessus Professional is an effective tool to help you discover vulnerabilities across your attack surface. It supports scanning across a variety of asset types such as operating systems (MacOS, Windows, Linux), applications, network devices and more.

Nessus comes with pre-built templates for credentialed and non-credentialed vulnerability scans. These templates, together with pre-built policies, help pen testers get the most out of their testing engagements. Nessus gives testers visibility into your organization's network and testers get an upper hand by being able to quickly uncover weaknesses and vulnerabilities.

Nessus has more than 142,000 plugins, which are automatically updated. It has coverage of more than 56,000 CVEs and more than 100 new plugins are released every week. That means with Nessus, pen testers get accurate, timely information about the latest vulnerabilities and malware so they can hunt them down on your network. 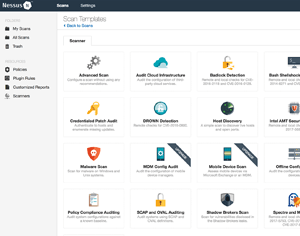 What’s the Answer to the Vulnerability Overload Problem?

What to Look for in a Cloud Vulnerability Management Solution