Is the Passive Vulnerability Scanner an Intrusion Detection System?

When I was at RSA earlier this year, I gave a variety of media interviews and product demos about Tenable solutions. I demonstrated Nessus detecting malicious processes and the Passive Vulnerability Scanner (PVS) providing an audit trail of all network activity that led up to the infection. I also showed how the Log Correlation Engine (LCE) correlated PVS logged DNS queries to known botnets.

After these demos, I was often asked, “so, is this an IDS?” In one interview (and I hope they print this) I responded by saying that at Tenable, we focus on compromise detection as part of our continuous vulnerability analysis. As the leading vulnerability management vendor in the market, I really tried to emphasize the point that looking for vulnerabilities and configuration issues in known software is just as important as looking for malicious software and malicious users.

Detecting a compromised system is very different from detecting a system that is under attack. Most intrusion detection systems detect attacks and not actual compromises. Tenable’s approach of monitoring files, system settings, logs, application processes and network traffic as part of our continuous vulnerability detection is an excellent platform to hunt malware, compromised system accounts, and botnets.

Below is an example screen shot of an “indicators” dashboard that shows a wide variety of passive and active attack and compromise data in realtime:

The Passive Vulnerability Scanner is not a network intrusion detection system. It does not have a list of common or recently discovered attack patterns nor does it identify probes and scans. Instead, the focus is to audit your network in real-time. PVS creates two types of data:

The passive vulnerability data is useful for auditing activity on the network and identifying systems with applications and network connectivity that is suspicious including:

As an example, below is a screenshot of a web server found on port 2869 by the PVS: 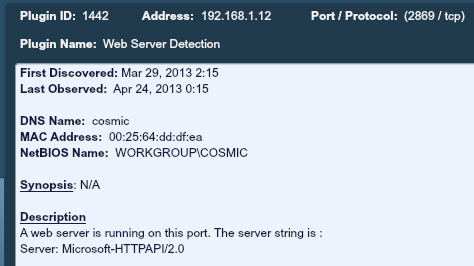 There are many other “passive vulnerability” items detected by PVS that indicate compromise that are too numerous to identify and list here. Many of the customers and users of the PVS I speak with tell me they identify malware, infected systems, and software installed by intruders with PVS because something stood out from the other systems that were passively profiled.

Below is an example screen shot of a dashboard that shows real-time network activity based on SSL, VNC, RDP and SSH traffic.

PVS’s real-time logs are another great resource to detect intrusions and compromised systems. I’ve worked with many organizations that send their PVS real-time logs to applications such as Splunk. We also have organizations who deploy the Tenable Log Correlation Engine to process PVS real-time logs. There are so many built-in correlations for the PVS within LCE that we recently announced that all Tenable SecurityCenter ContinuousView licenses would now include a 5 TB LCE license.

Below is a screen shot of a botnet dashboard which was created by leveraging PVS logs and LCE log searches to create graphs and trend lines of specific botnets.

There are many more types of correlations performed by LCE on PVS real-time logs. There are also a wide variety of forensic audits that can be used to perform forensic investigations of system behavior and network traffic.

When combined with Nessus active scans and logs from firewalls, operating systems, intrusion detection systems, and other sources, real-time data from PVS becomes a binding source of data that provides real-time context making the detection of intrusions possible.

Tenable’s Continous View offering allows organizations to deploy multiple Nessus scanners and Passive Vulnerability Scanners as well as a single SecurityCenter and single Log Correlation Engine. To learn how to leverage this platform for both unparalleled vulnerability discovery and the ability to hunt malware and intruders, please click here to read more.

Big data is everywhere. So is Bash, a command line interface found on most Linux and Unix machines. New Bash bugs are still being uncovered, with new patches coming out regularly. But hackers in the w...