Tenable.ot is far ahead of anybody that I reviewed in the control security space. The company understands controls...why did that change happen? Who made that change? We now have that power.

With growing convergence between IT and OT and increased cyber threats, Stupp corporation required real-time visibility into its programmable logic controllers (PLCs) and other ICS (Industrial Control Systems) devices. With the cost of downtime reaching tens of thousands of dollars an hour, the security team needed real-time visibility and alerts to detect external attacks, as well as insider threats and accidental or unauthorized changes to it’s controllers.

With Tenable.ot, the security team was able to get deep situational awareness of what’s happening in the OT network, who made changes, and why. They saved significant time through automated discovery and tracking of all ICS assets.

Scroll down to read the full case study.

Stupp Corporation produces the pipelines that form the backbone of North America’s energy infrastructure. Stupp’s mission is to produce high-integrity pipes and services for the safe transportation of oil, gas and associated products.

As the industrial threat landscape evolves, Stupp’s chief information officer, John Roosa, believed it was only a matter of time before OT infrastructure could become vulnerable to cyberattacks. To protect its production environment from potential downtime and safety risks, Stupp decided to deploy an industrial-oriented cybersecurity solution.

Greater connectivity between IT and OT networks increased the chances that Stupp’s ICS network could become compromised by a cyberattack. “You interface to the controls network through the same PCs that you use at your desk. Any threat that can be found in that PC-based environment can be projected down into the controls network very easily,” said Rich Michael, operations data analytics manager at Stupp.

Like most mid-sized enterprises, Stupp did not have the internal resources for 24/7 monitoring and control of its operational technology (OT) network. Improving the company’s cybersecurity posture meant being able to detect external attacks as well as insider threats and accidental or unauthorized changes to controllers.

Such changes to PLCs or other IT/OT devices can slow operations and in some cases result in a complete halt in productivity. According to Roosa, the cost of downtime can reach tens of thousands of dollars an hour. Real-time visibility and alerts to changes were essential for avoiding downtime scenarios. 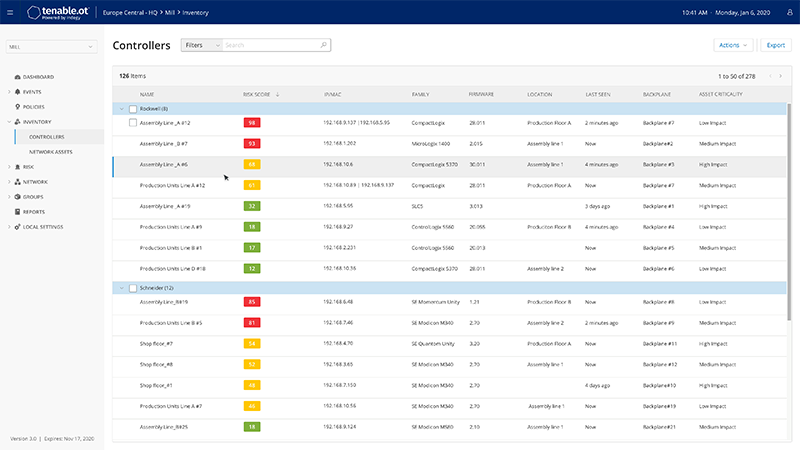 Following a successful proof of concept, Tenable.ot was deployed within Stupp’s ICS network. “The deployment was extremely simple – within an hour or so the system was up and running,” said Michael. “By the end of the day, I was comfortable with the user interface and was able to get value from it instantly.”

Familiar with the benefits of Tenable.ot, Brock Solutions set up a demo for Roosa and the Stupp team. “We reached out to several other vendors as part of our due diligence, but none of them showed me anything that was as forward-thinking as what Tenable.ot had in the controls security space,” said Roosa.

Because safety is such a key requirement for Stupp, ensuring comprehensive security, visibility and control of the OT infrastructure that physically moves large pipelines and components is critical. If any compromise to the PLC device caused it to be modified in the wrong way, the error would have a serious impact on workers’ safety.