Over the last few months, a variety of non-fungible token (NFT) projects including Bored Ape Yacht Club (BAYC), Azukis, MoonBirds and OkayBears have been impersonated on Twitter in order to steal users’ NFTs and digital currencies like Ethereum and other altcoins. To create hype, many of these projects have been promoting upcoming integrations with their own metaverses, giving scammers ample opportunity to capitalize on new or rumored announcements in association with these projects.

Cryptocurrency scams on Twitter, which have been prevalent since at least 2018, have persisted on the platform through bull and bear markets. If there is one thing that is certain about cryptocurrency scams it is that scammers are determined to find creative ways to capitalize on the fervor in cryptocurrency and maliciously profit from it.

Recently, Twitter users with an interest in NFTs and cryptocurrency are likely to have received notifications in their Twitter Mentions. The cryptocurrency scammers are tagging users in replies across hundreds of tweets. By mentioning these Twitter usernames, they’re trying to pique their curiosity in a bid to trick some users into falling for their scams. 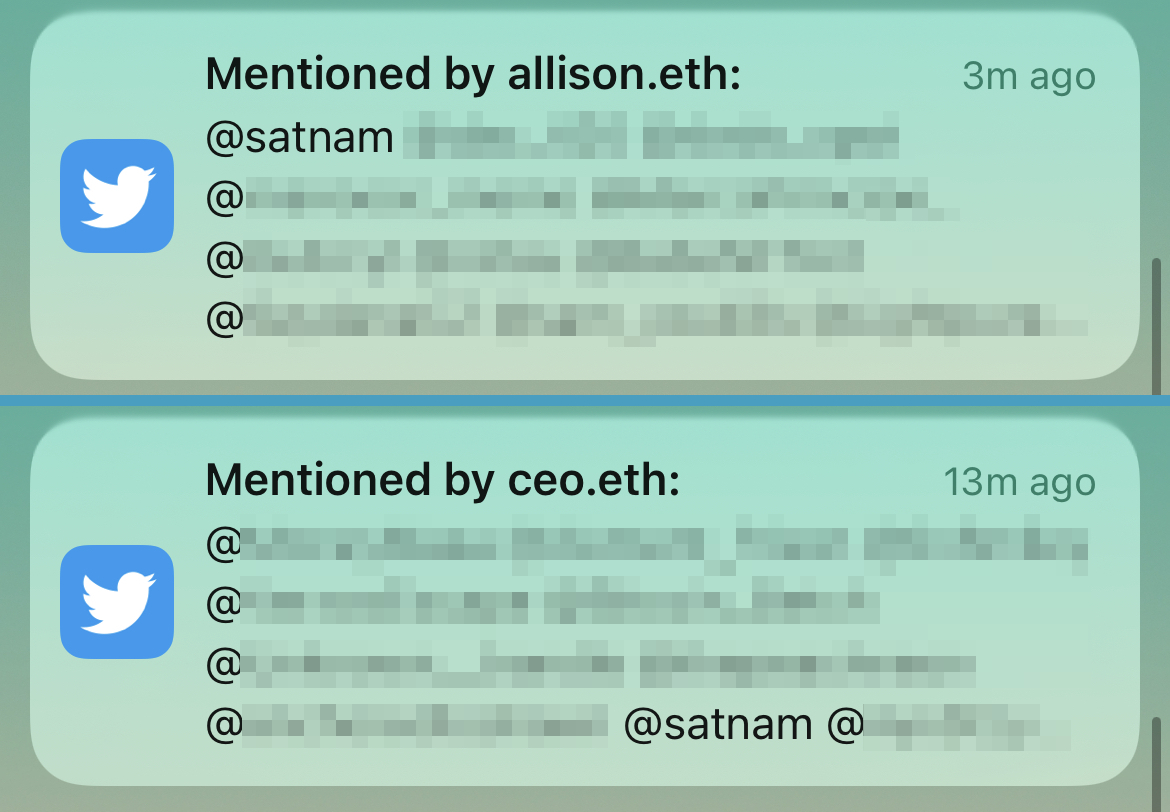 Airdrops and free NFTs are the perfect vehicle for cryptocurrency scams

BAYC, one of the blue chip NFT projects in the space that has seen exponential growth since its launch in April 2021, announced earlier this year an Airdrop of ApeCoin to holders of its various NFT projects such as BAYC, Mutant Ape Yacht Club and Bored Ape Kennel Club. Naturally, scammers saw this announcement as a ripe opportunity to target the interest in this upcoming airdrop and began creating campaigns by hijacking verified Twitter accounts to drive users to phishing sites. 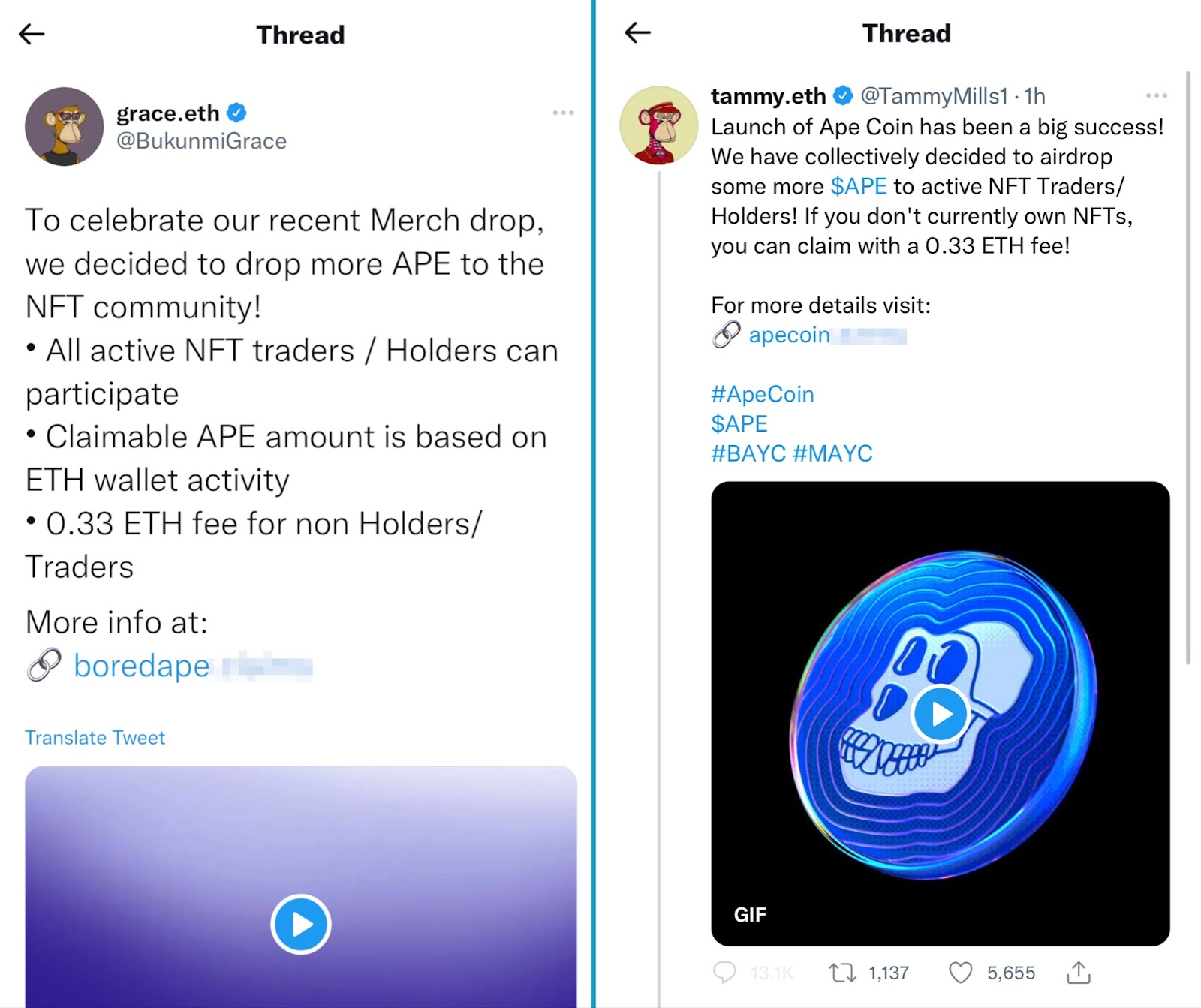 These hijacked verified accounts were pivoted to use profile pictures (PFPs) of BAYC NFTs to lend legitimacy to their claims of airdrops of $APE tokens. Additionally, the scammers used these verified accounts to mention users en masse to capture their attention. 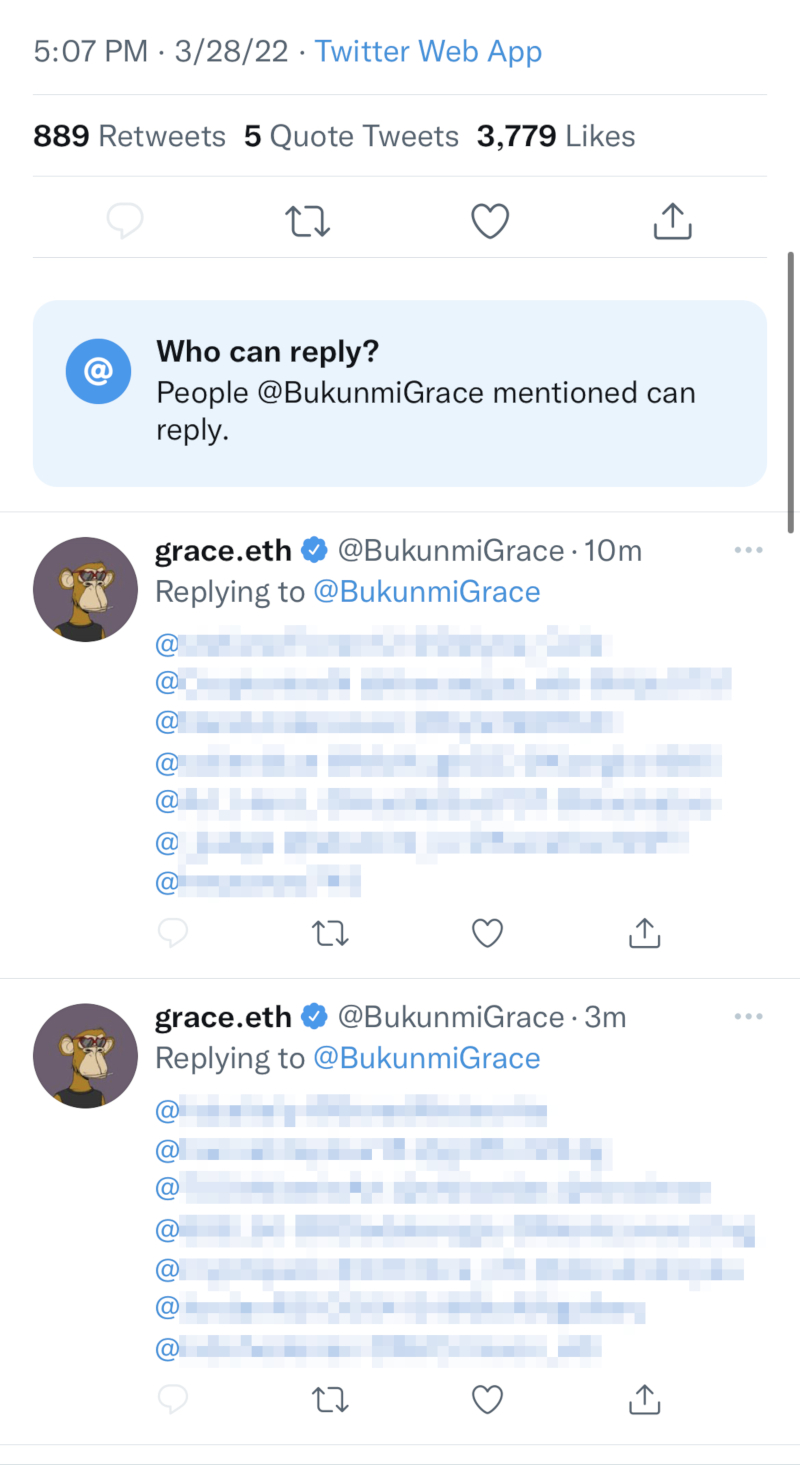 Besides BAYC, scammers have been impersonating a variety of other notable NFT projects including Azukis, Moonbirds, Invisible Friends and emerging projects on the Solana blockchain like OkayBears. 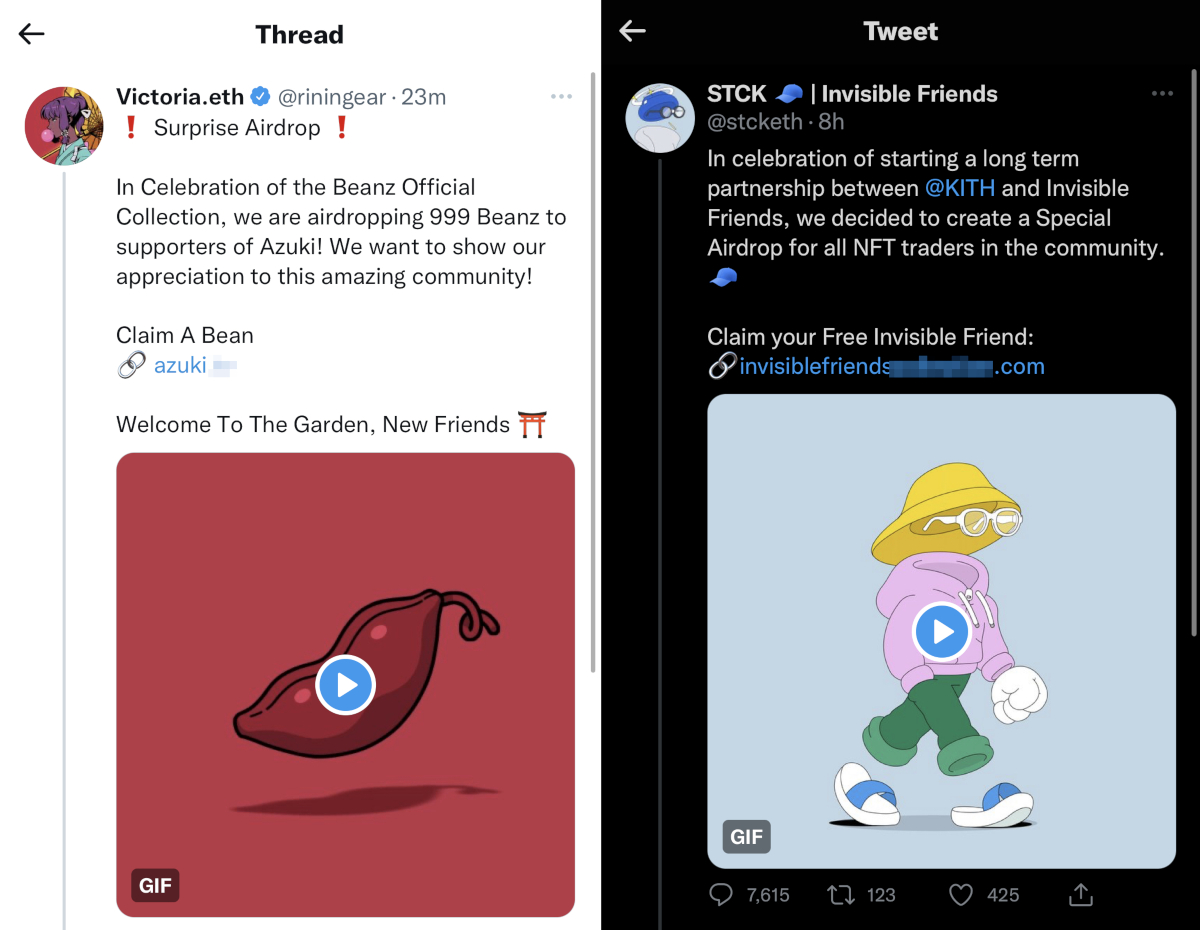 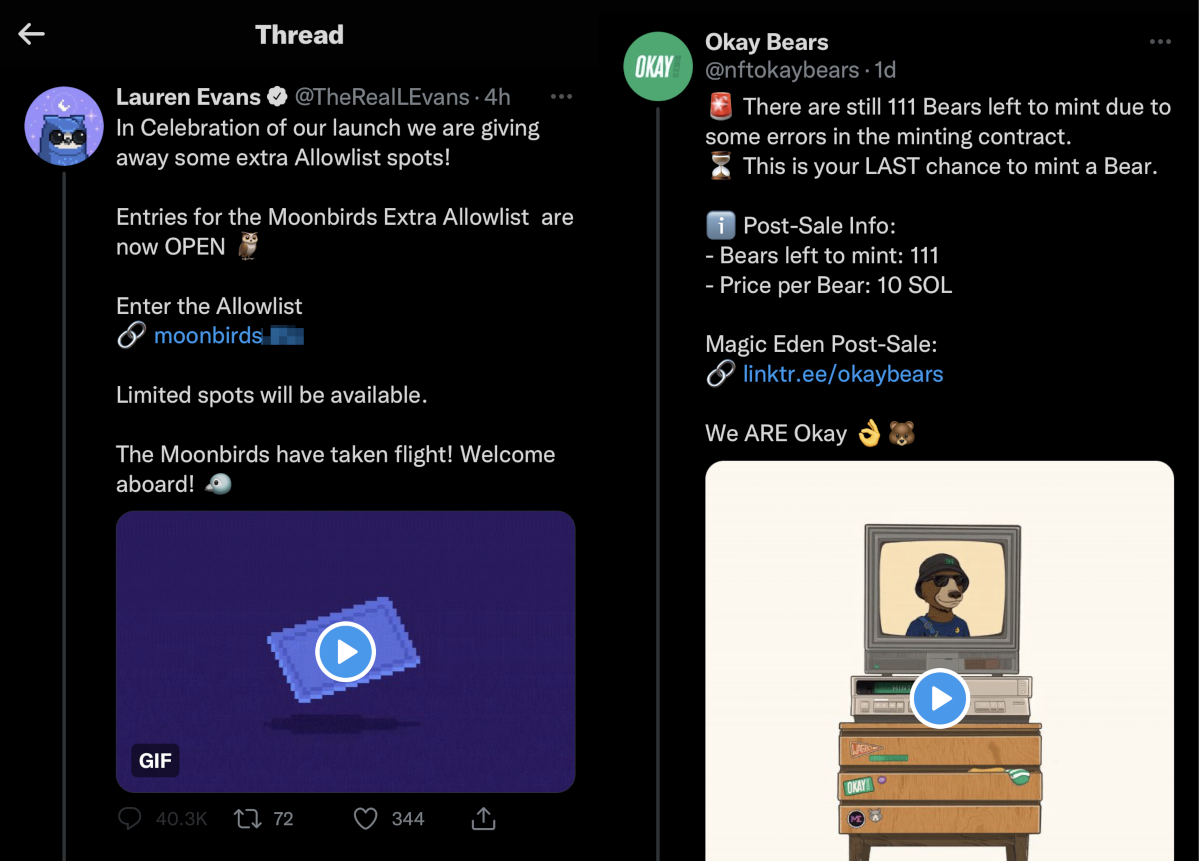 On April 30, Yuga Labs launched its Otherside metaverse project, a way for BAYC NFT holders to purchase deeds (“Otherdeeds”) of land in their metaverse. This launch overwhelmed the Ethereum network, resulting in high gas fees for enthusiasts trying to mint a piece of land in the metaverse. This led to significant backlash from some of the project’s most vocal supporters. To capitalize on the frustration felt by these enthusiasts, scammers quickly moved to create fake OthersideMeta accounts on Twitter, promoting phishing pages not just for minting Otherdeeds, but also pages for those wanting to get a refund of the excessive gas fees they paid attempting to acquire the Otherdeeds. 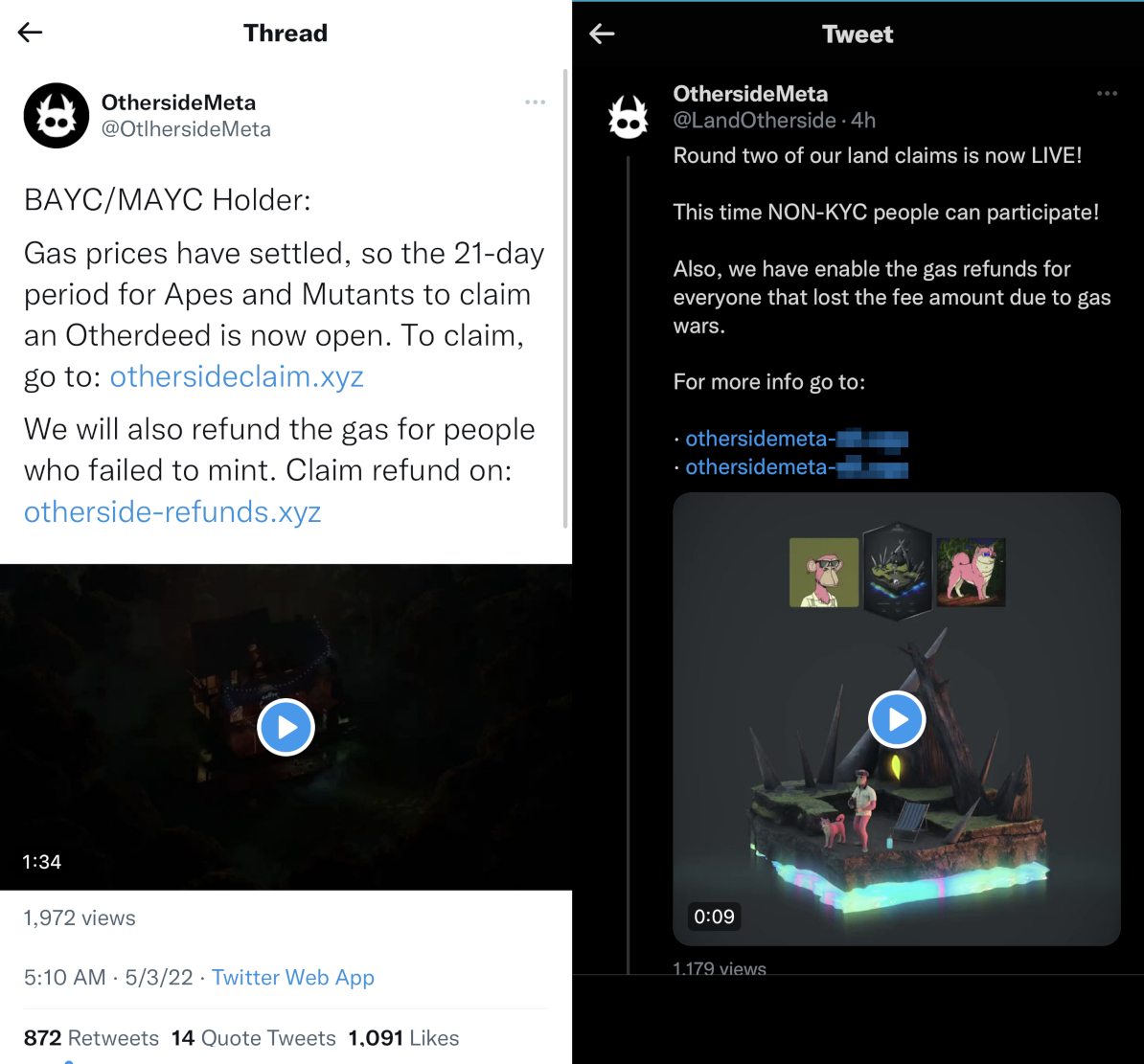 Scammers ironically warn of scammers, use fake accounts to add legitimacy to tweets

Conveniently, scammers will use the threat of potential scammers as justification for why they “clean” or “close” comments or replies to their tweets. 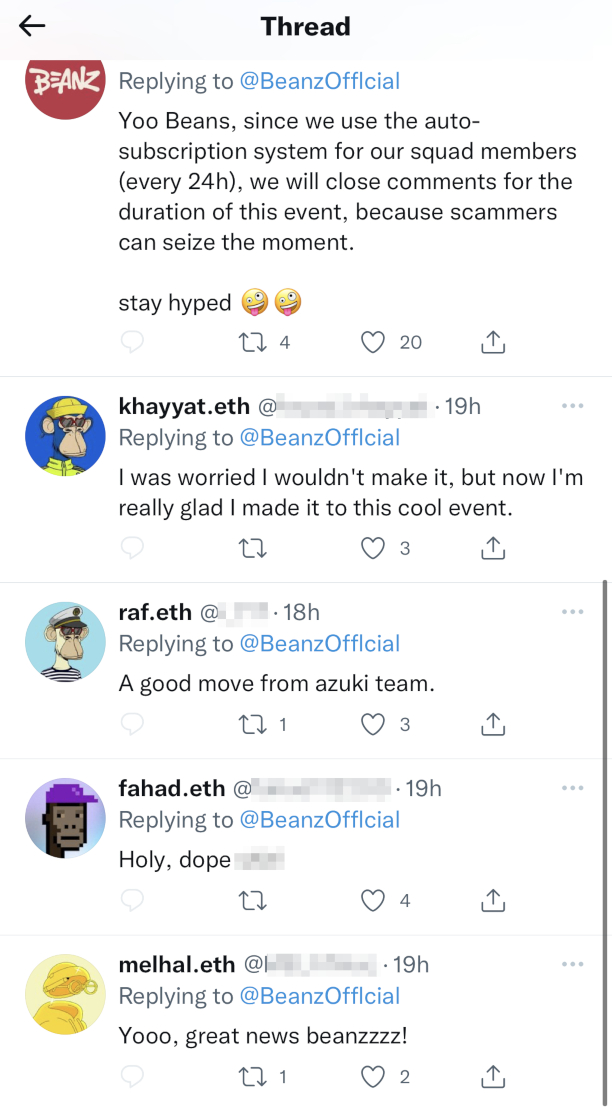 They then leverage fake accounts that respond to the tweet to make it appear legitimate. Once they’ve seeded a few of these fake tweets, they leverage a built-in Twitter feature for conversations to restrict who can respond to their tweets, which prevents users from warning others of the potential fraud that lies ahead. 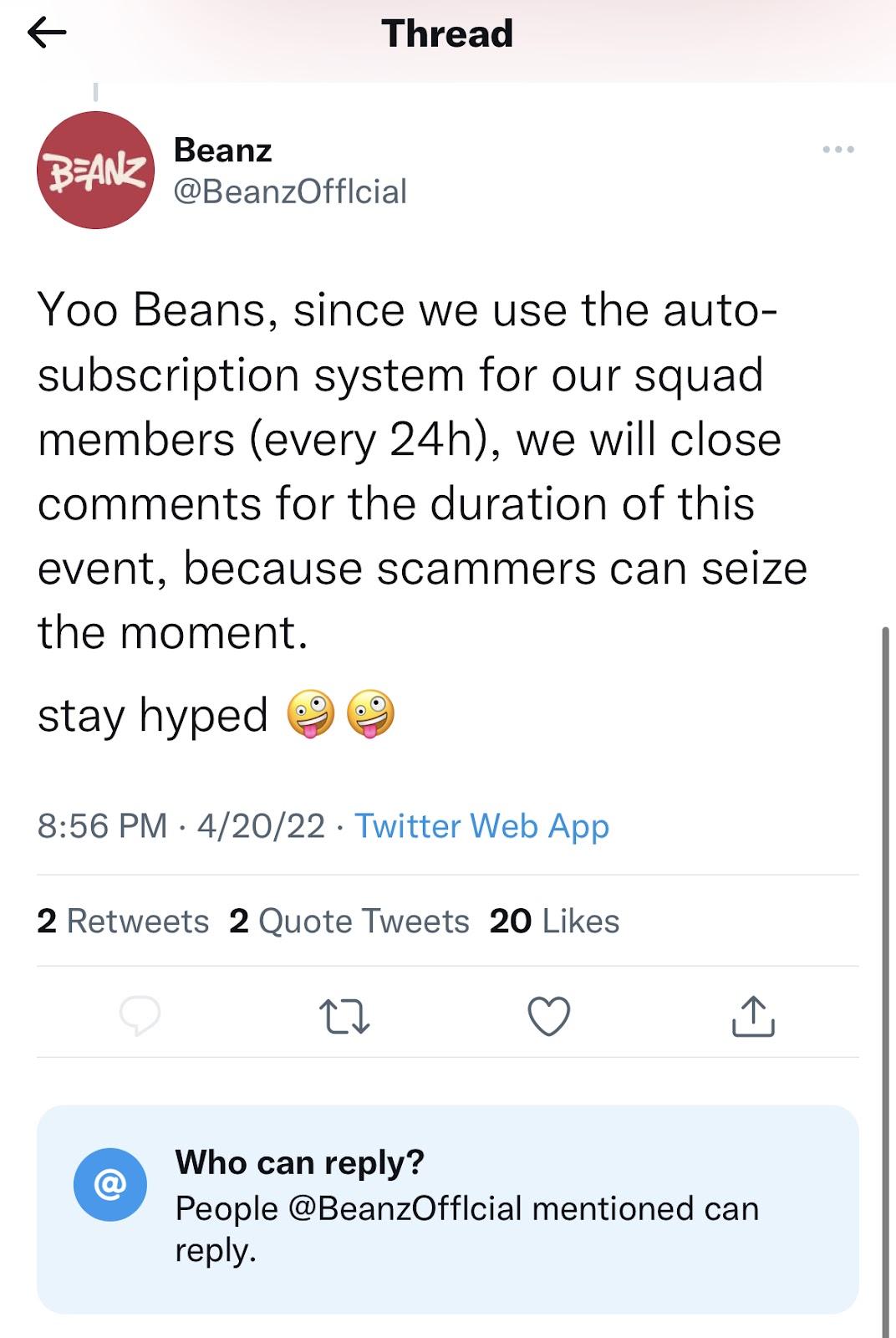 Phishing sites are indistinguishable from the legitimate NFT project sites

The scammers leverage assets from the legitimate NFT project sites in order to craft their phishing sites, which would make it difficult for the average cryptocurrency enthusiast to tell them apart. 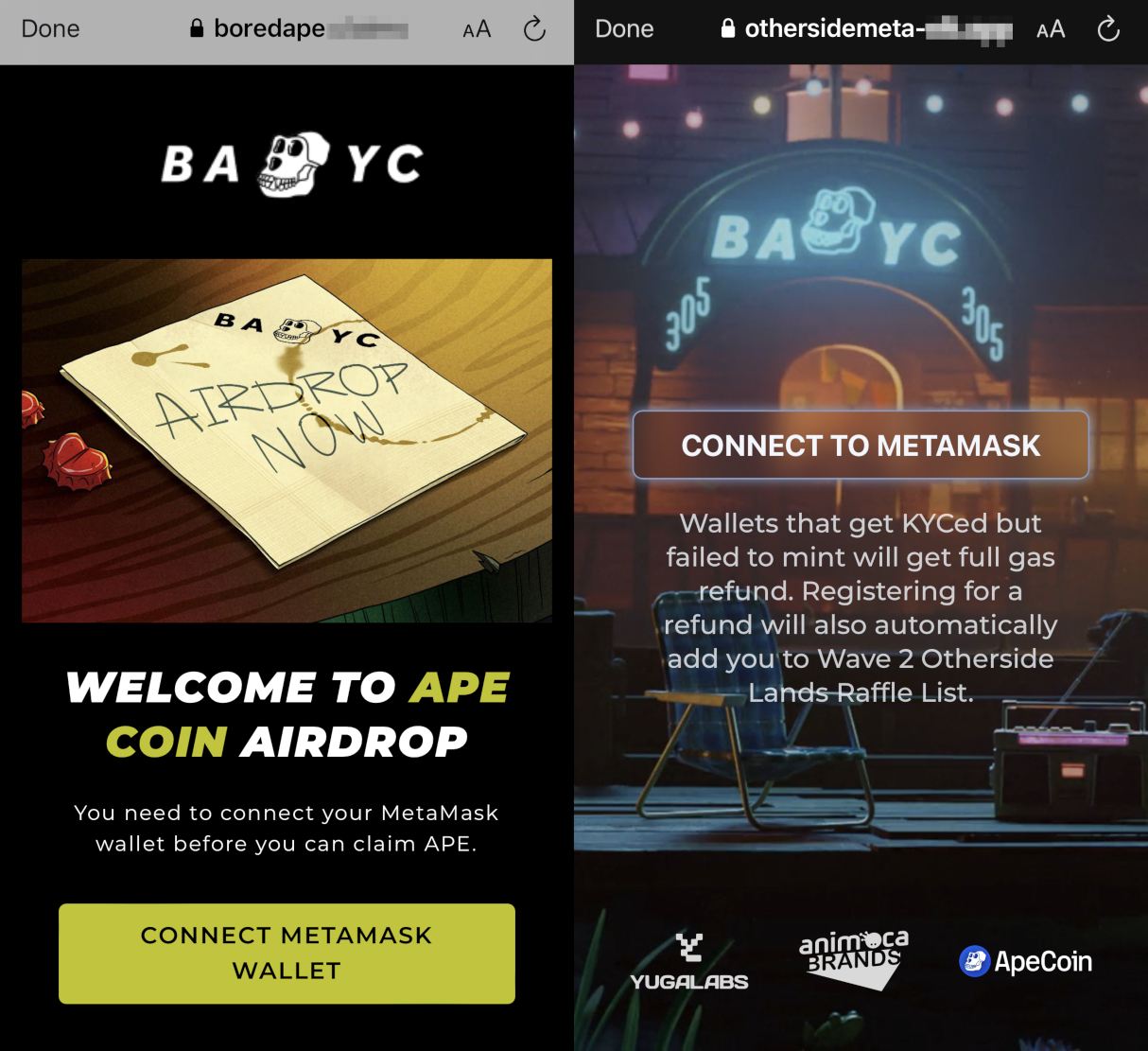 The scammers will also use popular services like Linktree to drive users to fake pages mimicking NFT marketplaces like OpenSea and Magic Eden. 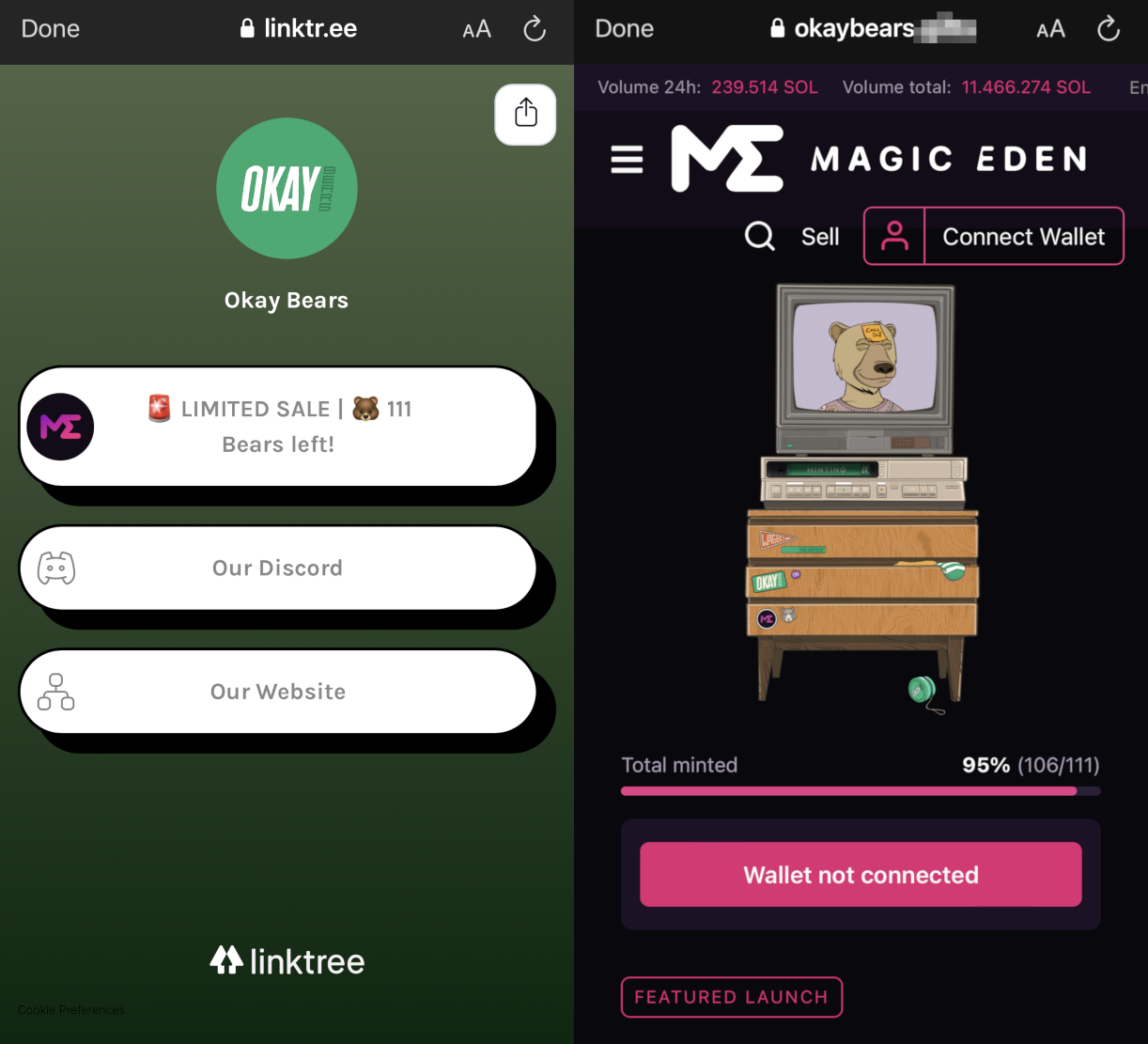 Connecting your wallet to untrusted sites is a dangerous prospect

These phishing sites don’t rely on stealing users’ traditional usernames and passwords. Instead, they seek to convince users to connect their cryptocurrency wallets, typically browser-based wallets such as MetaMask or Phantom (Solana) to the phishing sites. Unsuspecting users explicitly need to grant these phishing sites permission to access their wallets. By doing so, scammers are able to then transfer out the digital currencies like Ethereum ($ETH) or Solana ($SOL), as well as any NFTs being held in these wallets.

These NFT-based scams are extremely successful

A fellow researcher who goes by the pseudonym Zachxbt recently noted that the BAYC Otherside phishing sites were so successful that they were able to locate three cryptocurrency addresses that had stolen several NFTs from Mutant Ape Yacht Club (MAYC), BAYC, Azuki and others to the tune of $6.2 million dollars.

1/ As we all anticipated Otherside phishing sites would appear

The projects impersonated here are just the few examples I’ve encountered over the last few months. However, future NFT projects or announcements from existing projects that have yet to launch or have launched recently will likely be capitalized by scammers following the same playbook:

There may be some slight variations to the steps above, such as compromising the Twitter account of an existing figure within the cryptocurrency space, but chances are they will continue to use the same approach until something disrupts the playbook. 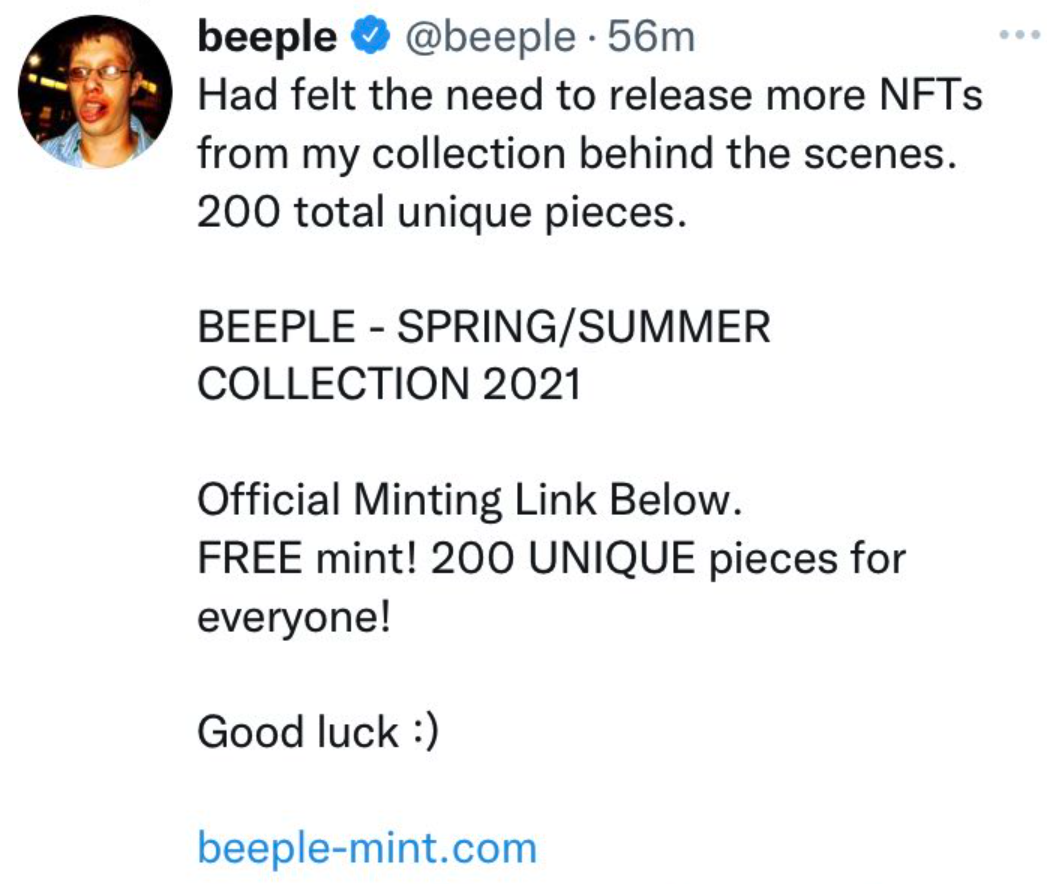 How Twitter could curtail many of these NFT cryptocurrency scams

There are a few ways Twitter could intervene to make things harder for scammers when it comes to these impersonations.

It’s a common refrain from me, but operating from a place of skepticism is likely going to provide some cover for users when it comes to such scams. If you’re proactively tagged in a tweet, you should be highly suspicious of the motivations behind it, even if it comes from a verified Twitter account. Seek out the original project’s website and cross-reference links that you see being shared on Twitter with the ones on their official website. Scammers will also rely on urgency to try to add pressure to users in this space. If an NFT mint is happening, they’ll say that there are a limited number of spots left. This urgency makes it easier to take advantage of users not wanting to miss out on the opportunity.

Much of the advice here is temporarily valuable because ultimately, scammers in this space are crafty and will continue to innovate their way into your MetaMask or other cryptocurrency wallets, which is why the oldest but most salient idiom remains valid: if it sounds too good to be true, it is.