Instagram accounts claiming to donate meals to Sudanese civilians are a ruse to gain followers in order to pivot to personal accounts or sell them for a profit.

In the wake of the Sudan crisis that has been in national headlines over the last several weeks, and as social media users go #BlueForSudan by changing their profile pictures to honor the death of a prominent protester, scammers have unsurprisingly seized the opportunity to gain followers by capitalizing on the movement’s growing interest on social media, specifically on Instagram.

The Sudan Meal Project Instagram account appears to have emerged during the week of June 10, boldly claiming to donate “100,000 meals to Sudanese civilians.” 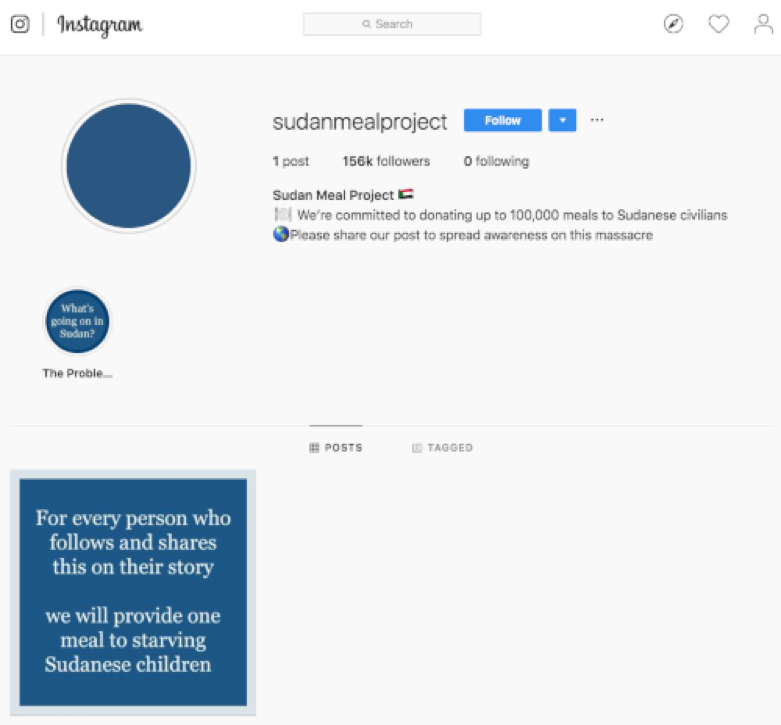 The account contained a single post that promoted the message, “For every person who follows and shares this on their story, we will provide one meal to starving Sudanese children.”

The post was accompanied by a message claiming that for “every STORY REPOST this post gets, we will provide one meal to Sudanese children, and you will help spread awareness on what’s happening in Sudan.” The post also provided instructions on how to repost the message as an Instagram story. 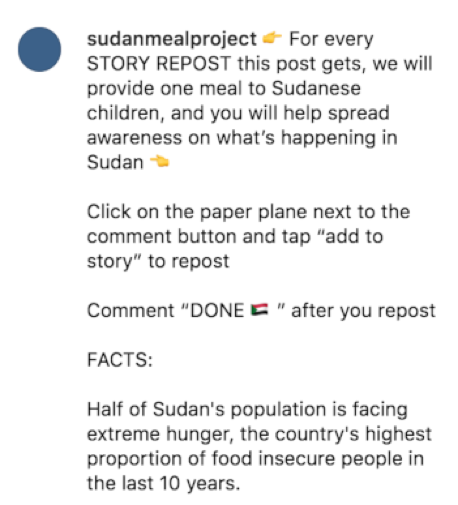 Over the course of several days, Sudan Meal Project’s account would continue to grow. When I first observed the account, it had just over 150,000 followers.

At the time this blog was written, the account had over 370,000 followers and the sole post was liked over 1.6 million times.

All other red flags aside, unlike likes, comments and followers, there is no way to identify when a post is reposted to an Instagram story, which makes this premise implausible. This is based on individual experience using Instagram. It is possible that some celebrity/influencer accounts on Instagram may have such information provided to them, but for the average user, this doesn’t appear to be the case.

Observing the rapid success of the original Sudan Meal Project account, other scammers quickly began to follow the same blueprint by creating similarly named accounts, using the same images and post text with the same goal in mind: capitalize on the crisis to gain more followers.

Not every copycat account followed the blueprint completely. For instance, a viral Indian meme account renamed itself, and changed its bio and profile image hoping nobody would notice. 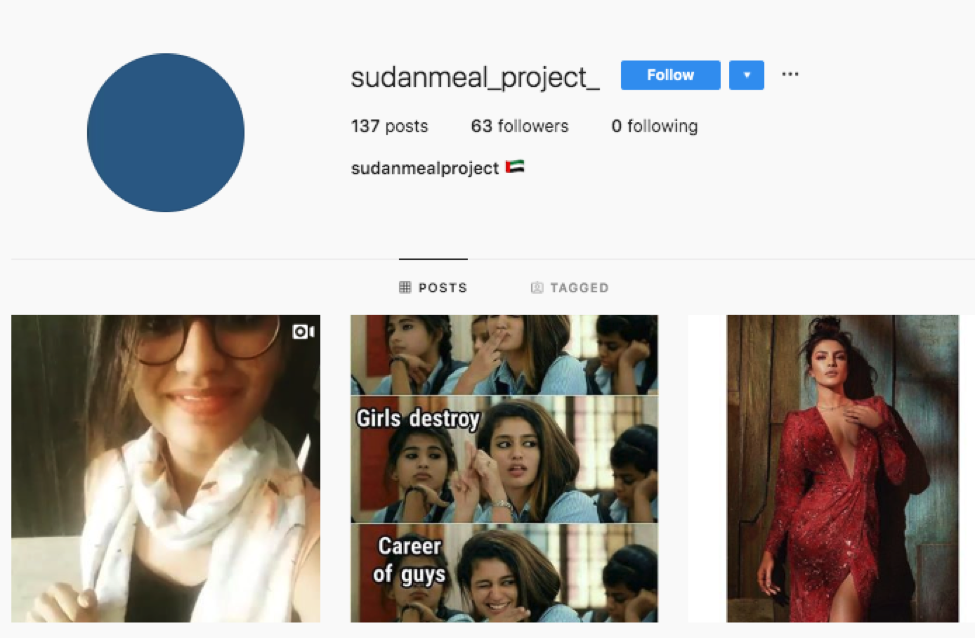 Another account said all other accounts are fake and inadvertently spilled the tea by saying “Every one [sic] is making these account [sic] for followers.”

Another account used the same blueprint of offering donations, but used the flag of Sudan as its profile image and included a link to the Sudan Knowledge website.

Another account calling itself Sudan Meal Foundation followed the same blueprint but used a different color scheme and a different image. 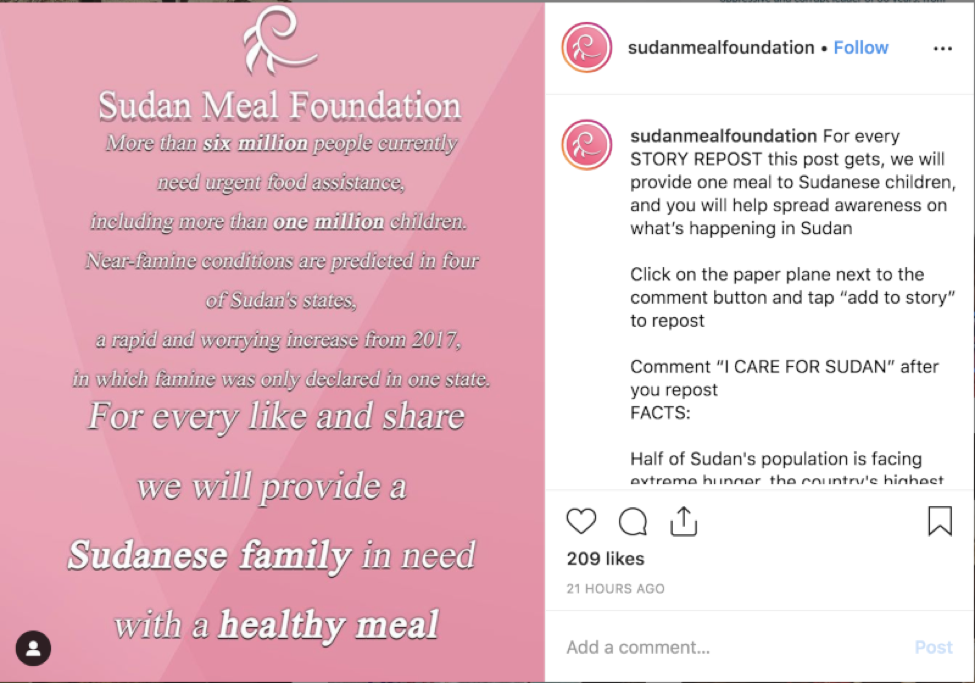 I also found a “care_for_sudan” account promoting itself on one of the copycat Sudan Meal Project accounts.

Unlike the Sudan Meal Project accounts, the “care_for_sudan” account linked to a GoFundMe page that claimed funds are needed to help send missionaries to Sudan. This fundraiser has not been verified and I do not know if the fundraiser itself was put together by the Instagram account owner, or was just merely an effort to seem legitimate. The account still promoted the Sudan Meal Project message along with a “1 Share = 1 Meal” message. 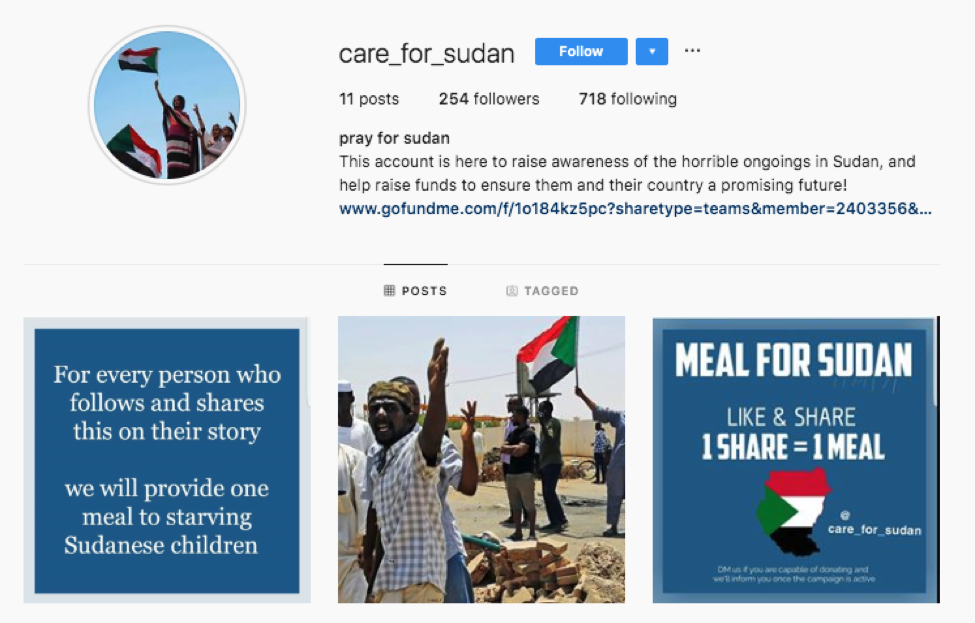 I found another Instagram account that followed the Sudan Meal Project blueprint, but took it a step further by adding a PayPal link on its profile, in an effort to scam users out of money, not just a follow. 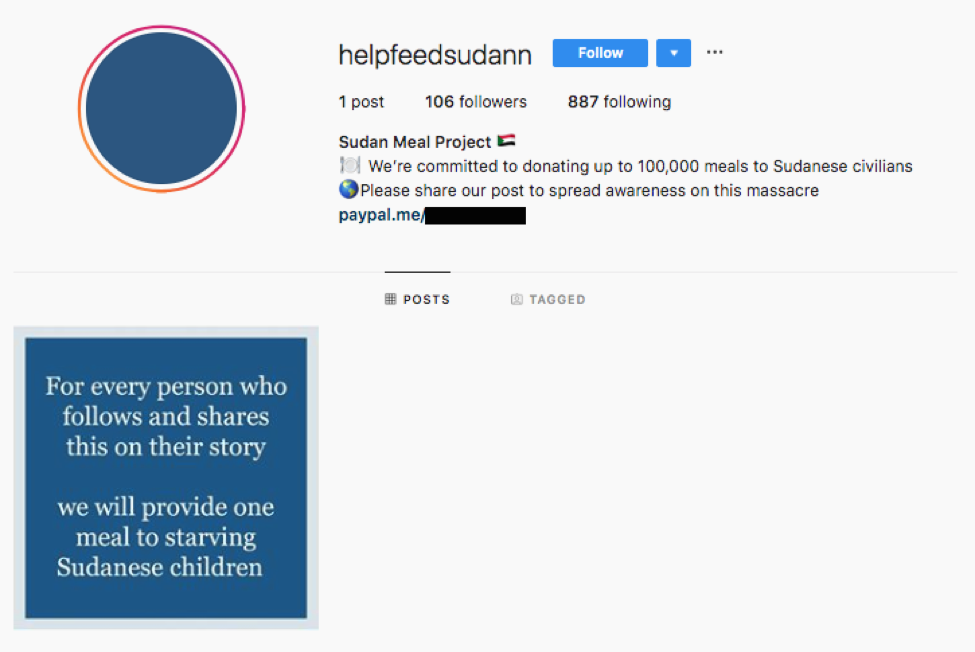 Another account offering to “Help Sudan” said it would donate $10 for every repost received to charities helping in Sudan.

While investigating the Sudan Meal Project copycats, I discovered another account called “sudanawarenesshelp” that appeared to have run its course, as it had no posts, but managed to amass 245,000 followers over an unknown period of time. It is possible this account preceded or was operating at the same time as the Sudan Meal Project account. 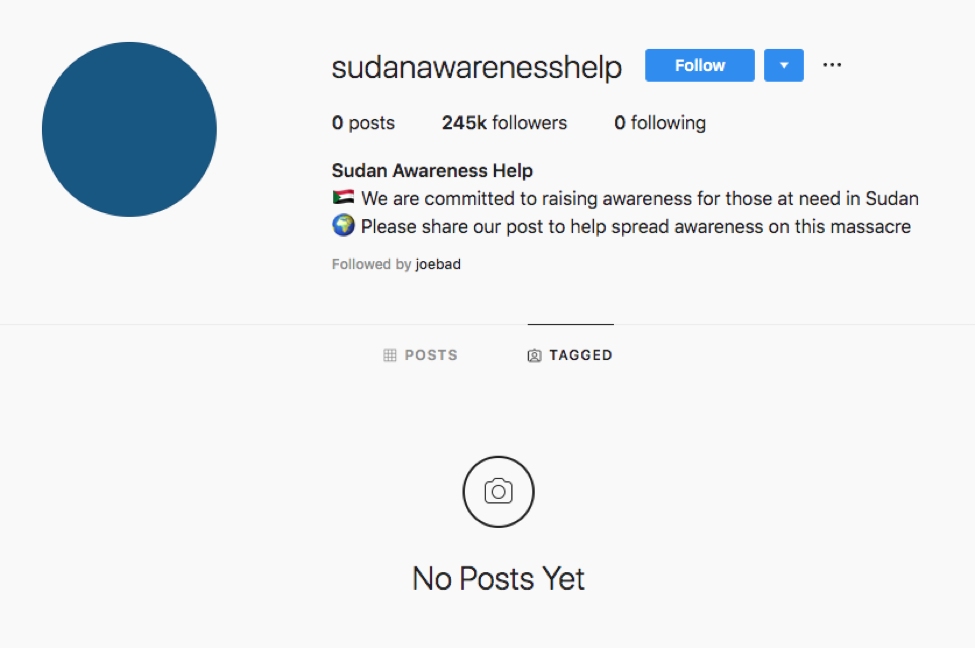 There are other Sudan Awareness accounts, some that follow a similar approach to the Sudan Meal Project’s message. It’s possible that the negative association with Sudan Meal Project may have prompted some of the scammers to change their messaging.

The Sudan Awareness Project claimed for every story repost, it would donate $1 USD to the Sudanese Relief Fund, which references the Sudan Relief Fund, a 501(c)(3) nonprofit organization that has been around for over two decades.

Another account called “blue.sudan.official,” which has over 1,000 followers, itself claimed to be a 501c3 and is associated with the website sudanawareness.org. I can confirm this website does not exist.

Pivoting Away From Sudan Meal Project and Awareness Accounts

The end goal behind these Sudan Meal Project and Sudan Awareness accounts is simple: amass enough followers to ultimately perform an account pivot. This means the account owners change the username, full name, profile image and posts. This can be done either from scratch with no followers, or by taking an existing account and trying to increase its existing follower counts by trying to masquerade as a Sudan Meal Project type of account before pivoting back to the original account. A pivoted account is valuable because it has amassed more followers, and while not every account gains thousands of followers, to some, even a modest increase of hundreds of followers helps them increase their audience. Operators of an account that is able to gain thousands of followers can pivot the account for themselves or put it up for sale on an underground forum, where it can be sold to someone who needs an Instagram account with a built-in following.

Not all accounts get fully pivoted. For instance, I observed one account called “sudansafteyproject” pivot to an account called “iggaazaleaa,” but it didn’t remove the Sudan Meal Project image or text. 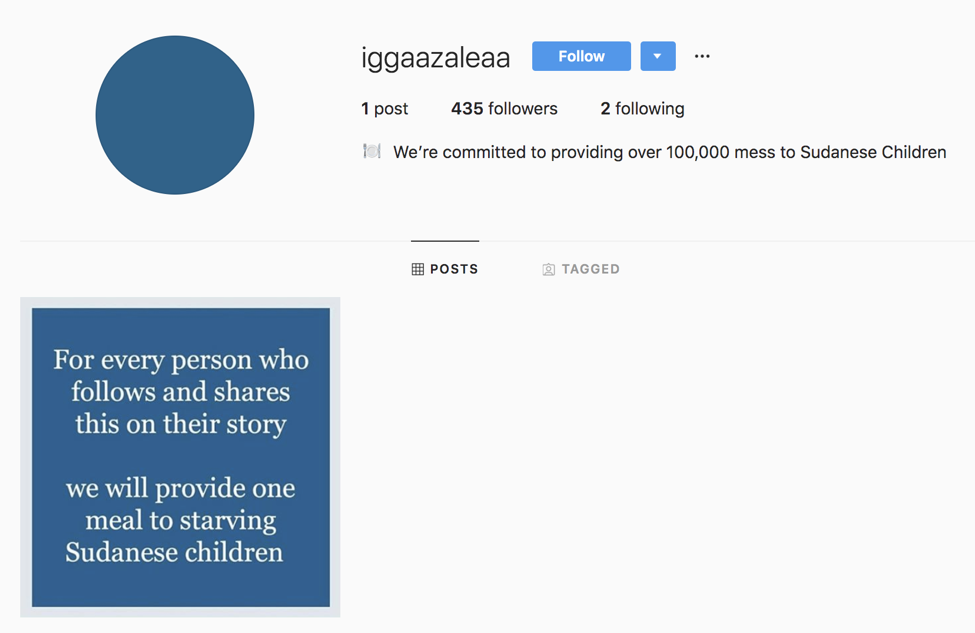 I’ve primarily seen accounts pivoted to meme-based accounts as well as some personal accounts. For instance, one of the accounts tagged in a Sudan Meal Project copycat account included an account named “rawann[redacted].” 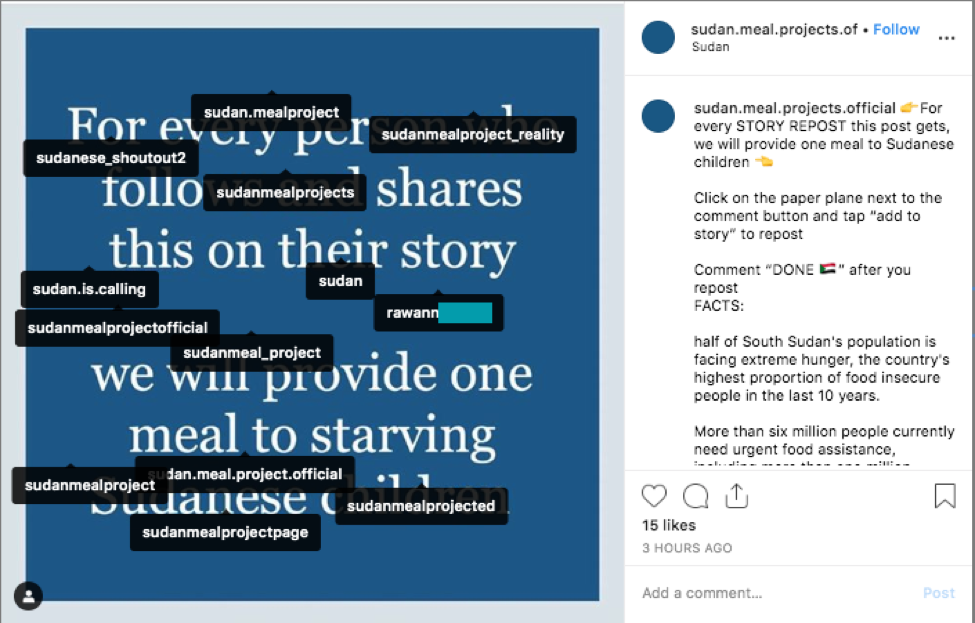 The account had nearly 5,000 followers and just one photograph. It has since been removed.

Another account that pivoted from a Sudan Meal Project copycat back to a meme account was called out by a commentator. The account owner responded to the commenter saying “report me then.” 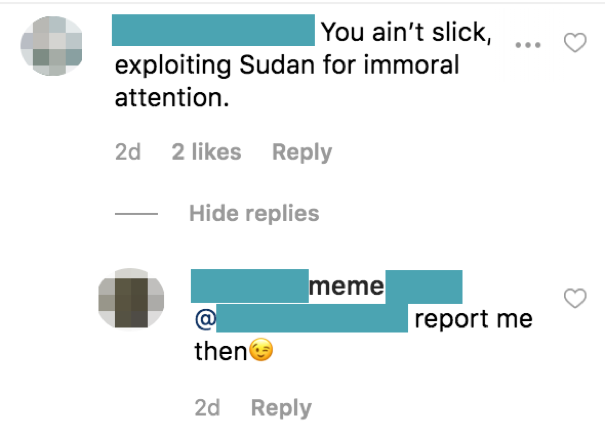 The previous post, with nearly 2 million likes, was removed and replaced with a post claiming the account owner was “working with multiple organizations and donors to help Sudan privately.” The account owner added “We realized it was not a good idea to relate this issue with shares and followers.” The new goal? To “raise awareness.” 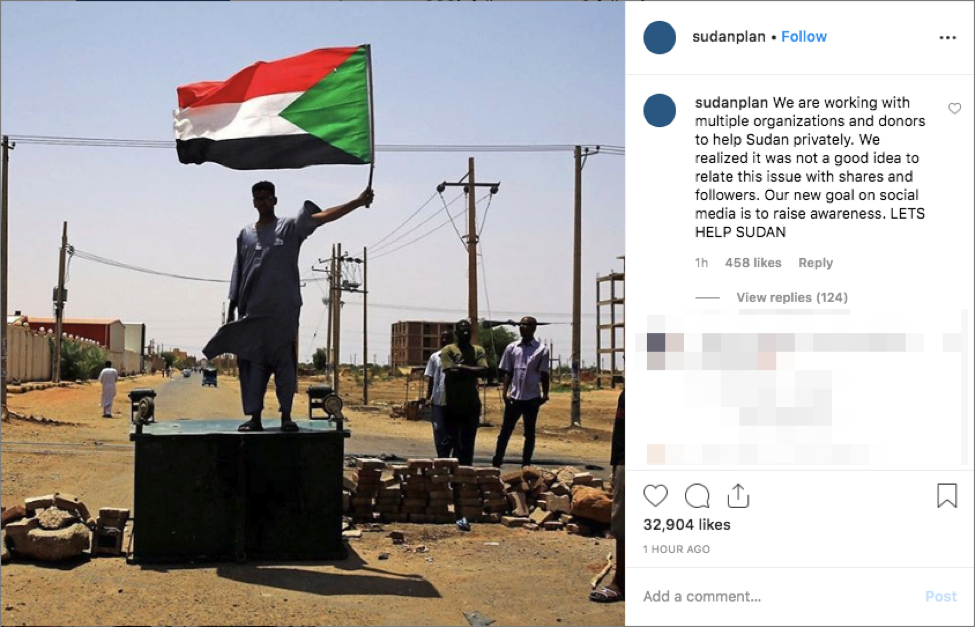 Based on the data that I collected on just over 100 Sudan Meal Project and Awareness scam accounts, the accounts had nearly 900,000 followers with 1.7 million likes on photos, the majority of which came from the Sudan Meal Project’s original photo.

During the course of my research for this blog post, the Sudan Plan account was removed by instagram. Despite its removal, many of the copycat accounts remain active. While this trend is by no means a new one, it serves as a reminder of the opportunistic nature of scammers on social media services like Instagram. Despite many users questioning the accounts or reporting them to Instagram, the accounts still managed to amass followers.

Be skeptical of accounts claiming to donate food or supplies or fundraising for the crisis in Sudan. If you’re looking to donate, seek out charitable organizations with a verifiable history.