Building a precise inventory of existing assets across your attack surface is essential for effective vulnerability management. Here's how the asset detection process in Nessus scanners can help.

Compiling a complete asset inventory has always been a prerequisite for effective core vulnerability management (VM). With the attack surface continuously growing in size and complexity, it is more critical than ever that you identify all the assets in your network — not just your core IT assets but also any assets related to operational technology (OT) as well as any "shadow IT" assets. Any assets that are not properly managed pose additional risk.

Once you've identified all your assets, you need visibility into each of them in order to gather accurate information to assess your risk. Most vulnerability checks rely on publicly available information regarding the specific platforms and versions affected. Therefore, the accuracy of these checks depends on precise platform, software, version and patch information coming from the assets.

While the Nessus scanner is well known for its ability to detect vulnerabilities, its capabilities to retrieve inventory information from the network may be slightly less known. However, the impact of these capabilities is substantial for:

Asset detection in Nessus scanners is performed by a number of Nessus plugins. While the vast majority of plugins (+95%) focus on vulnerability coverage, asset detection relies on accurate information about the host, which is retrieved via specialized plugins (most of them INFO severity). Note that Nessus scanners mainly focus on the IT space, including shadow IT assets, while OT assets are covered by other Tenable products, such as Tenable.ot.

The asset detection process is logically structured in four main phases, as shown in Figure 1: port scanning; service and protocol detection; software detection; and OS fingerprinting. These are logically sequential and performed by multiple plugins, which produce outputs that are consumed in subsequent phases. However, there may be some overlap between phases (some plugins for protocol detection may run at the same time as some plugins for software detection).

In the following sections, we describe the particular phases and the main families and plugins involved.

A Nessus scan starts by checking if a given host is alive and, if that's the case, listing the ports that are found open. The Ping Remote Host plugin (10180) is usually the first plugin to run in a Nessus scan (although it can be disabled) when trying to determine if a given hostname or IP corresponds to a live target. If this plugin receives no response from the target, the host is marked as dead and the scan stops. Otherwise, Nessus will try to perform port scanning with a number of plugins from the port scanners family, which can be done remotely or locally (if credentials are available). Finding open ports is a critical step for any network scanner as it will enable subsequent service discovery and probing as well as further communication with the remote host.

Before continuing with the scan, Nessus checks if the host is likely to be a "fragile" asset, such as a printer or an OT device, which may be negatively affected by the large number and variety of requests that active scanning sends to a target. For this reason, a feature is enabled by default that protects fragile devices. "Stopper plugins," such as 22481 and 11933, will cancel the scan if a fragile device is detected.

From the list of host open ports, the scanner performs service and protocol detection, mainly through plugins from the service detection family.

Service detection plugins (mainly plugin 22964) probe the open ports and analyze the response to determine which services are running on the remote host. Information regarding known and unknown services (e.g., service banner, service version or SSL encaps) is stored to be used by downstream plugins. 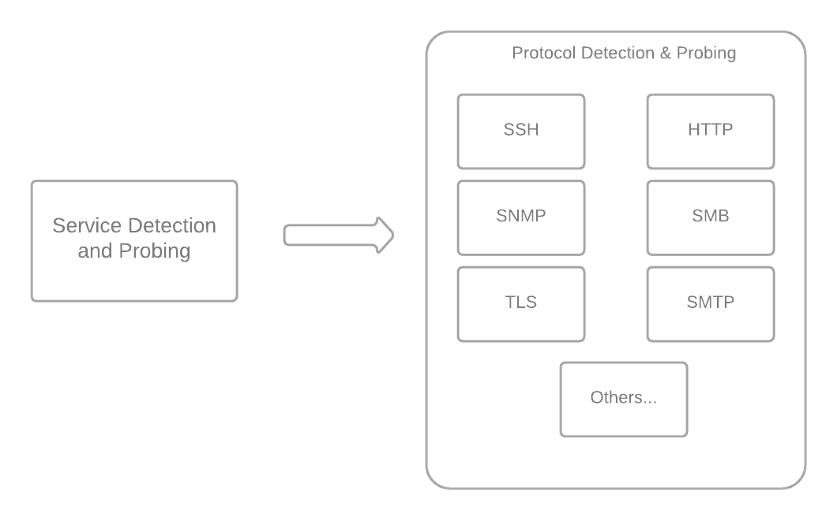 Based on the information gathered about available protocols and services, the Nessus scanner will then try to detect specific apps, their versions, patches and additional information on the remote host. These detections can be classified into three main types:

It is worth noting that credentialed detections have a better chance of being successful and will provide more complete and reliable information than uncredentialed ones.

In the case of credentialed scans, the scanner runs a number of "local enumerators" for supported operating systems (Windows and Unix-based). The mission of these is to obtain information about general characteristics of the system, including installed patches and software (13855, 97993, 83991) as well as processes and services (110483, 70329). Subsequent plugins can pull this information for particular detections or other checks. We'll be able to see this better with a couple of specific examples, one for Windows and one for a Unix-based OS.

First, let's consider the case of a typical Windows local detection, for example for the Zoom client (118801). This plugin checks for Windows registry information coming from 13855. Depending on the information found there, additional checks will be performed against the registry and the filesystem, to retrieve version information and verify the location of the installation.

Now let's consider the case of the local Java detection for Unix (64815). This is a slightly more complicated detection, given the number of different ways Java may be present on a system. In this plugin, a combination of checks are performed, based on filesystem information, package manager data and running processes.

As mentioned, remote detections rely on probing and fingerprinting. Although not as precise as their local counterparts, remote detections do not require system credentials, and may help reveal blind spots in your network. As an example, we are going to explore remote HTTP-based detections.

HTTP-based detections are probably the most prevalent among remote Nessus detections, given how common web servers, web apps and HTTP communications are. Figure 6 shows an example of the HTTP-based detection of the Apache Web Server (plugin 48204). Here we can see the flow of information coming from the service and protocol detection (e.g., 10582), how additional plugins aggregate information for HTTP servers in general (e.g., 10107, 19689) and the Apache Web server in particular (see also 111465). 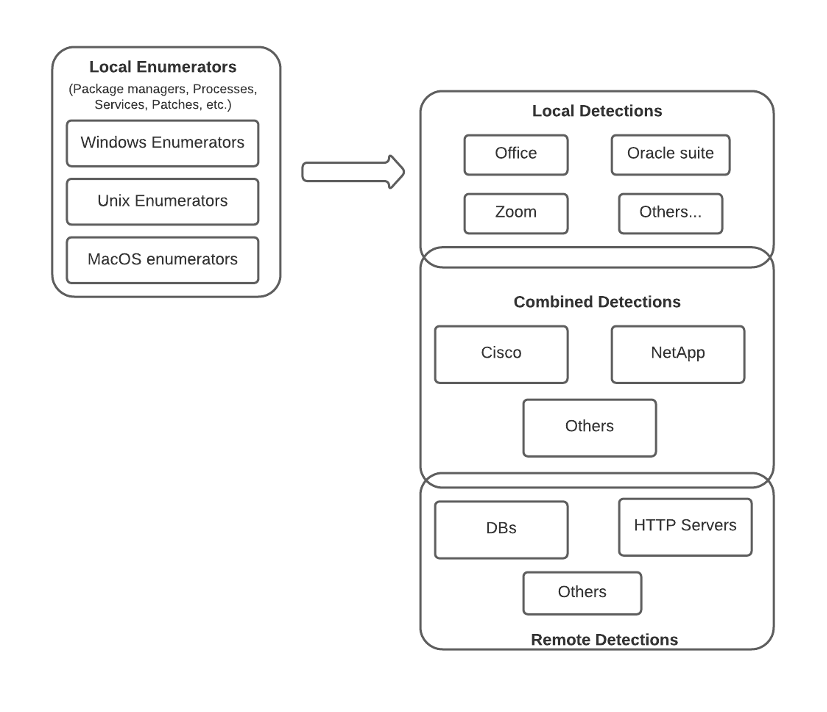 OS identification is the last step in the asset inventory pipeline, as the scanner considers information gathered from all the previous phases to produce its best guess. As shown in Figure 8, the OS identification plugin (11936) relies on many other plugins and multiple protocols. Each of those plugins can produce their own guess, which has an associated confidence level. These confidence levels are defined on a case-by-base basis and depend heavily on the specific protocol and fingerprints involved.

In the following table, we can see a particular example with four fingerprinting methods. The OS identification plugin will choose the one with the highest confidence (SMB local), and report its guess as the identified OS. 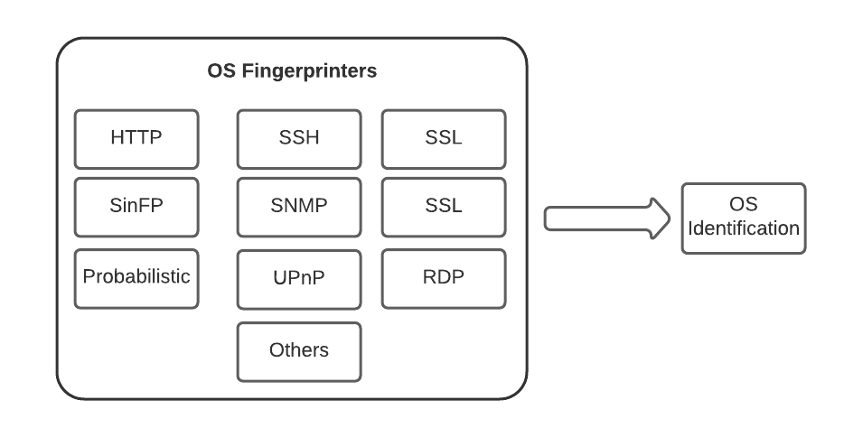 Nessus asset inventory capabilities are a foundation stone for both traditional and risk-based vulnerability management. These capabilities are also useful on their own as a means for network inventory and to reveal blind spots. To this end, Tenable releases hundreds of asset detection plugins for new software and hardware yearly, so our customers are able to accurately determine their cyber exposure.

Jesus Garcia Galan is a research engineering manager with Tenable. He has a doctorate in software engineering and a background in both academia and industry, with a proven track record of innovation, including a diverse range of research publications, projects and patents.

We believe it's time for a new approach to cyber awareness, one that borrows on the concept of the shared responsibility model common in cloud computing. Here's how we get there. How much...
Robert Huber
October 7, 2021