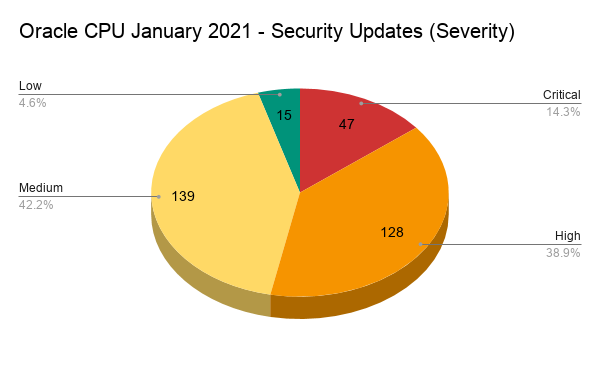 This quarter’s update includes fixes for 47 critical CVEs. The Oracle Fusion Middleware category contained the highest number of patches at 60, representing just over 18% of the patches from this quarter. A full breakdown of the patches can be seen in the table below:

This quarter and for the first time in recent memory, Oracle assigned no exploitable CVEs to two particular product families: Oracle Global Lifecycle Management and Oracle Secure Backup. This means that these two products did not contain any vulnerabilities that Oracle considered to be exploitable by an attacker. However, Oracle did note that this quarter’s updates include third party patches for five CVEs:

As part of this quarter’s patch update, Oracle addressed five new vulnerabilities in Oracle WebLogic Server, a prominent application server solution within Oracle’s Fusion Middleware Product Family. Each quarter, we keep an eye out for newly disclosed flaws in WebLogic Server because of their favorability with attackers. This is supported in the findings from our 2020 Threat Landscape Retrospective Report, where we highlight four noteworthy vulnerabilities in Oracle WebLogic Server that were exploited in-the-wild.

The five vulnerabilities in WebLogic Server addressed this quarter includes:

All five vulnerabilities are considered “easily exploitable” according to Oracle, and successful exploitation would lead to a complete takeover of the WebLogic Server.

According to a note from Oracle in this quarter’s release, the Fusion Middleware product family contains patches for CVE-2020-14750, a patch bypass for CVE-2020-14882, which was initially patched in Oracle’s October 2020 CPU release. However, due to the discovery of the patch bypass and in-the-wild exploitation, Oracle released a fix as part of an out-of-band (OOB) patch. The January 2021 CPU includes this fix as part of the Fusion Middleware release to ensure organizations that did not apply the OOB patch receive these critical patches.

At the time this blog post was published, a writeup on the exploitation of CVE-2021-2109, a WebLogic remote code execution vulnerability, was available. Details from the writeup include screenshots showing exploitation and technical details which could be used to create a working proof-of-concept.

Customers are advised to apply all relevant patches in this quarter’s CPU. Please refer to the January 2021 advisory for full details.