Last week, Apache published a security update to address six vulnerabilities in HTTP Server versions 2.4.17 to 2.4.38. This release includes a fix for CVE-2019-0211, a local root privilege escalation vulnerability that could lead to arbitrary code execution.

The vulnerability, dubbed CARPE (DIEM), exists in Apache Multi-Processing Modules (MPMs) such as mod_prefork, mod_worker and mod_event. Charles Fol, the researcher who discovered and named the vulnerability, targeted mod_prefork for his breakdown and subsequent PoC.

According to Fol, Apache uses a shared-memory area known as scoreboard to keep tabs on worker processes (lower privileges) managed by mod_prefork (root privileges). Exploitation of this vulnerability requires an attacker to gain read/write access to a worker process (through a separate exploit) in order to manipulate the scoreboard to point to a rogue worker before an Apache graceful restart is initiated by logrotate.

In their advisory, Apache noted that non-Unix systems are unaffected by CVE-2019-0211. This is likely due to the fact that the vulnerability is triggered by an Apache graceful restart (apache2ctl graceful), which is normally executed by logrotate every morning on *Nix systems.

Fol published his PoC to Github on April 8. In his blog, he notes this exploit is “between a POC and a proper exploit.” The expectation is now that the PoC is publicly available, it will most likely be refined further and ultimately leveraged by attackers in the wild. This is of great concern on shared hosting environments, where a malicious user could leverage this exploit to gain root access on the host and access files shared by other users on the host environment.

CVE-2019-0211 is patched in Apache HTTP Server version 2.4.39. *Nix distributions including Ubuntu, Debian, and SuSE have package updates available for install. FreeBSD posted an advisory, but there is no security update available for it yet. Users are encouraged to install these updates as soon as possible.

Additionally, cPanel released a security update for EasyApache 4 that addresses this vulnerability. 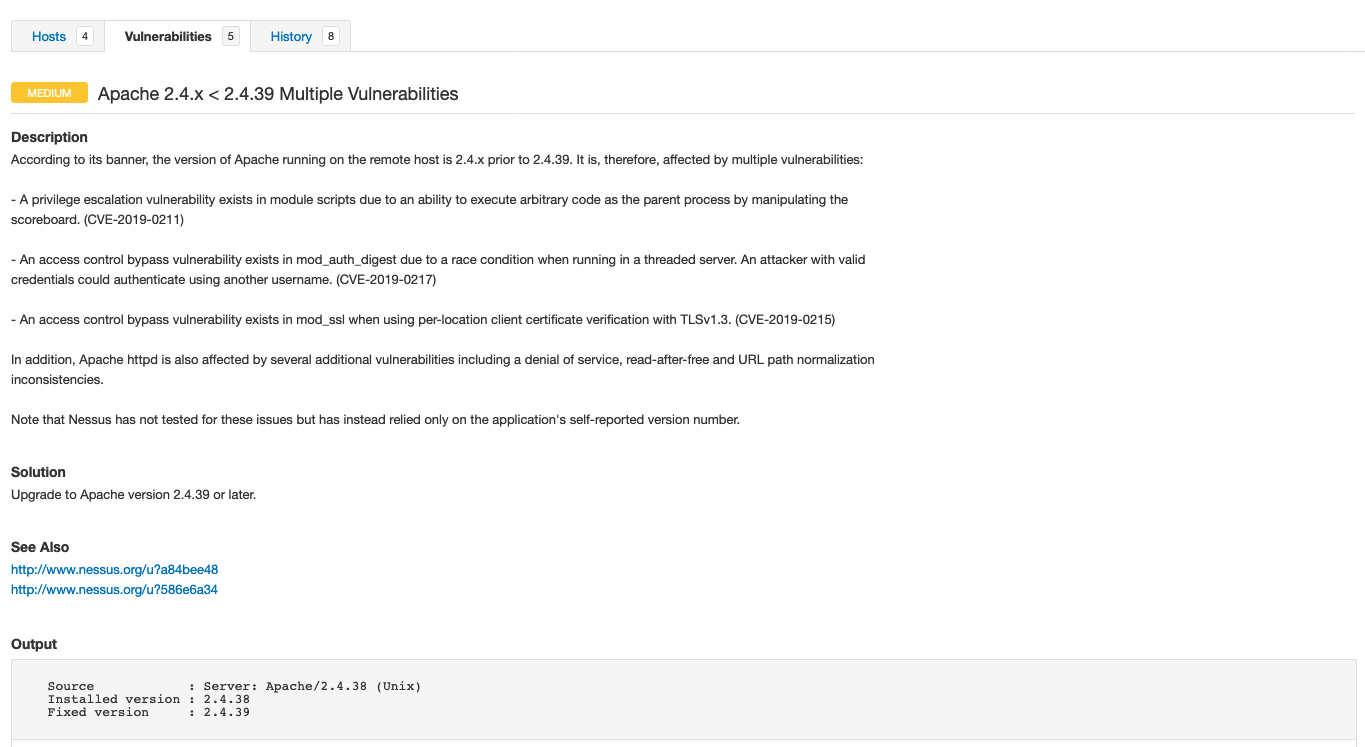 Continuous monitoring via Nessus Network Monitor will result in the following output: