Credentialed scans have long been advocated as the quickest and most accurate way to perform a vulnerability assessment against any network. But like with all things technology, it runs into two usual roadblocks: people and processes.

When the topic of credentialed network scans is discussed it inevitably leads to questions such as, who is requesting access and why? What level of privileges is needed and why? Which commands will be run and why? All legitimate questions which should be rightly asked before granting access to any system. But the back-and-forth between different teams typically leads to a long, drawn-out process eventually resulting in either the requestor being denied access or getting access to a limited account which may lead to incomplete scan results.

To help solve this problem, our customers have asked us to provide transparency around which commands are run by a Nessus® scan, what privileges are required to run the commands and if the commands failed, which Nessus plugins would fail as a result. An additional requirement was to provide this information in an easy-to-consume output format so that they can configure a scan account while having the least privileges and still be able to perform a complete and accurate scan.

With the recent release of Nessus 6.11, we are taking steps to address that issue by releasing a beta feature which will allow our customers to do just that across Tenable.io™ Vulnerability Management, Nessus and Security Center™.

At a high level, the process can be summarized in five simple steps :

Log in to the system as the root user and create a normal user account. Run visudo to edit the /etc/sudoers file, and add the commands the user is allowed to run with sudo. In the example below I created a user ‘nessus_scan_account’ assigned it SUDOER User_Alias who can run the ‘/usr/bin/dmidecode’ command which requires root privileges to run. 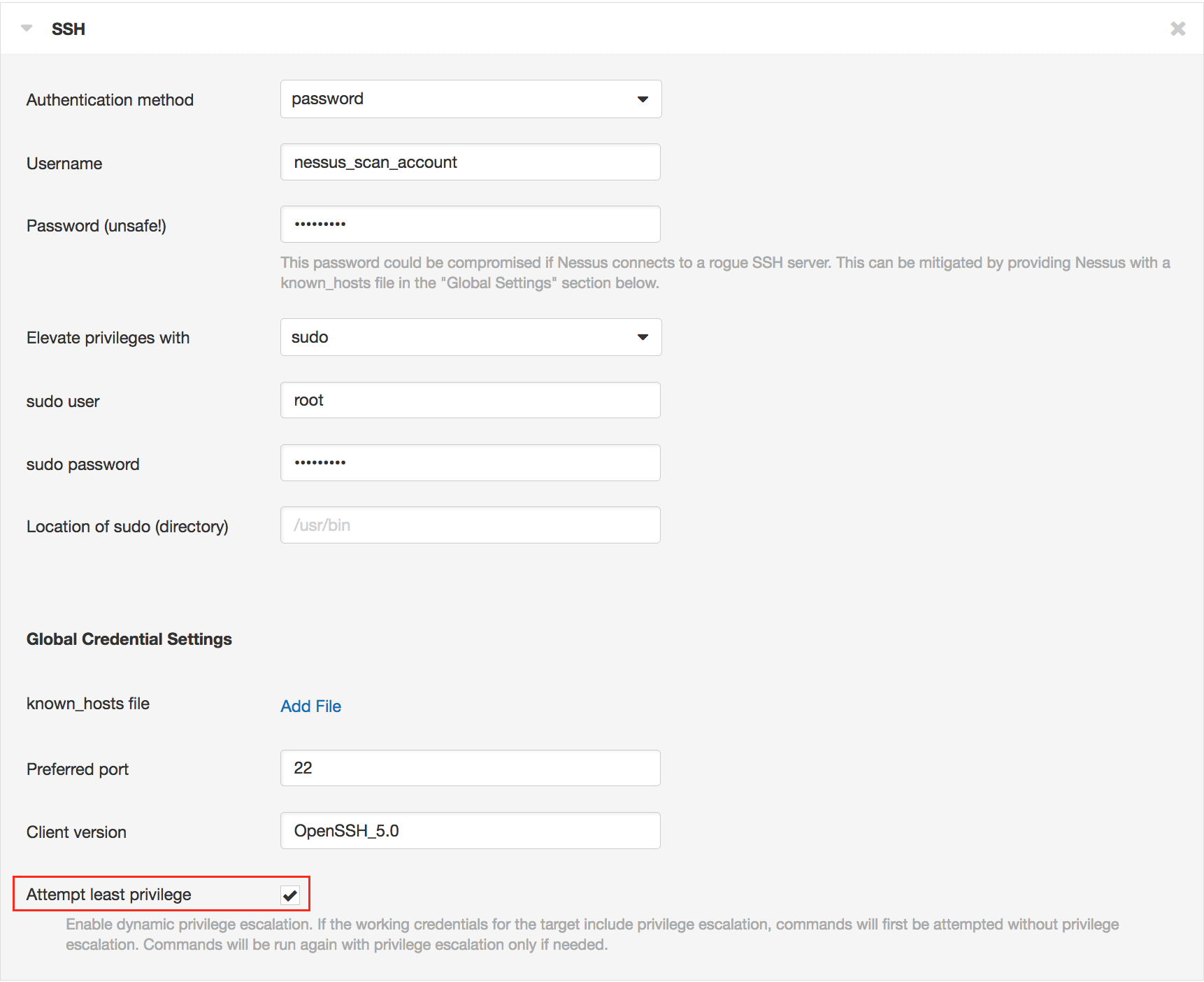 For Security Center, follow the below screens to enable the preference. 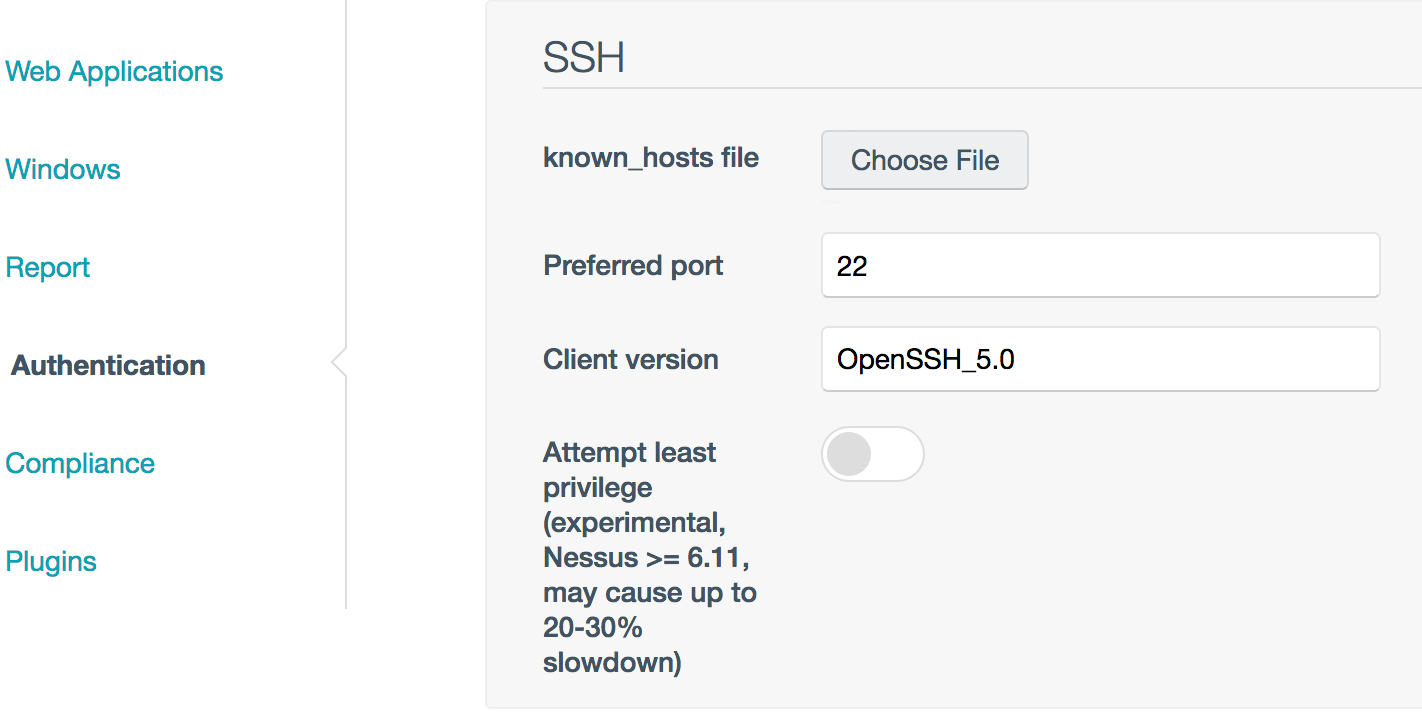 Once the scan finishes, review output of plugins #102094 and #102095 to determine which plugins successfully ran with privilege escalation and which plugins failed due to insufficient privileges.

Plugin #102095 reports all plugins which ran with escalated privileges. The plugin output is in YAML, and includes information about the account used, plugin file name, id, name and the command it ran. This plugin will help users verify only authorized commands are run with sudo privileges. 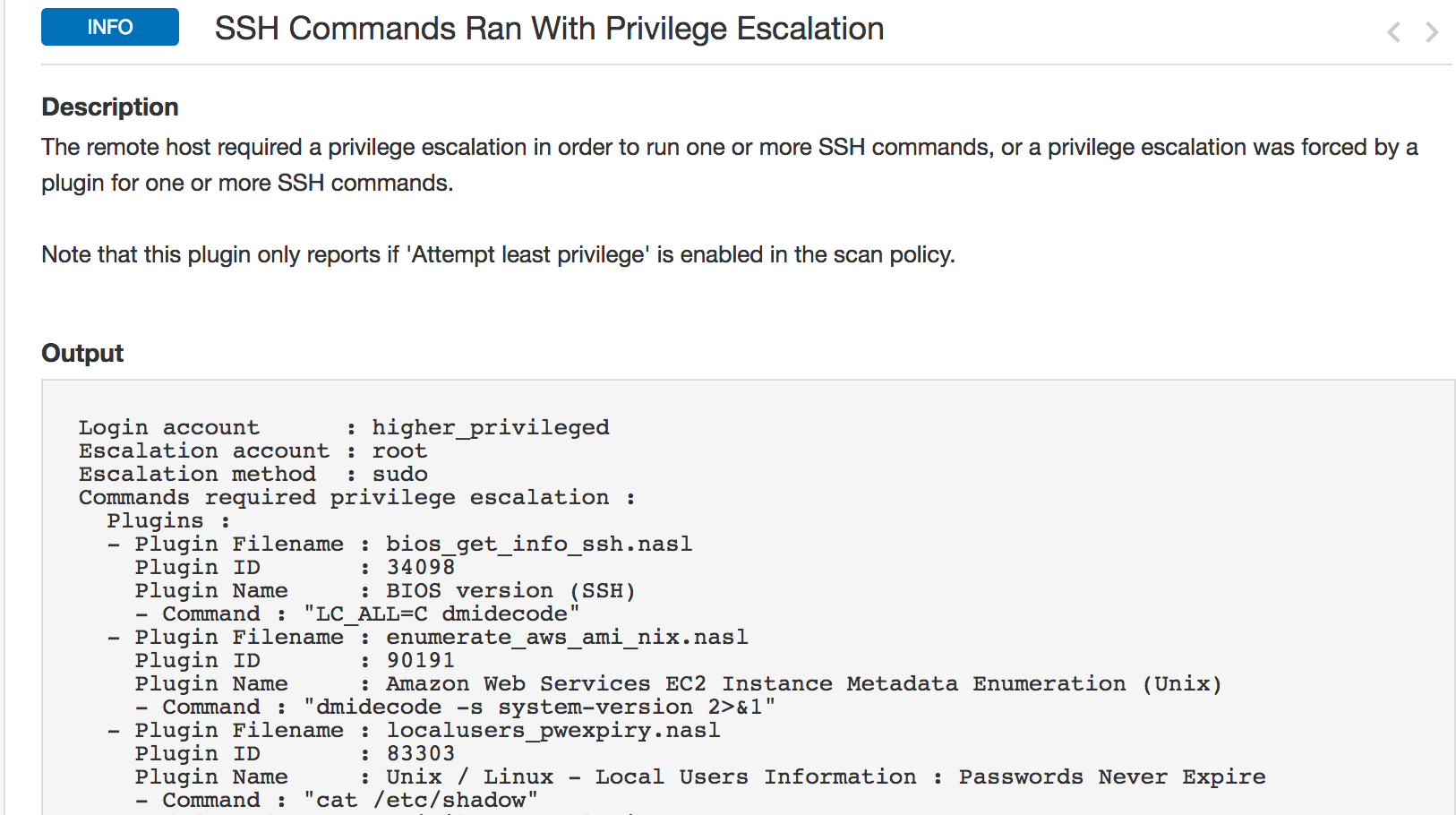 Plugin #102094 reports all plugins which failed to run with escalated privileges due to insufficient privileges. As was the case in the previous plugin, the plugin output is in YAML to facilitate easier creation of /etc/sudoers file. It includes information about the account used, plugin file name, id, name, and the command it ran.

Customers should review the output of this plugin to fine tune the commands which can be run with the sudo account. Note the command ‘cat /etc/shadow’ failed in the below example. We will resolve this issue in the next step.

In the previous step, plugin #102094 reported execution of command ‘cat /etc/shadow’ failed due to privilege escalation failure. We can easily resolve this by adding ‘/bin/cat /etc/shadow’ as an allowed command to the SUDOER alias we created earlier in /etc/sudoer file, which will allow the next scan to run this command successfully with escalated privileges. You could also continue to block certain privileged commands from running by not updating the /etc/sudoers file and accepting the risk of certain vulnerabilities not being detected due to incomplete information.

To perform an accurate authenticated scan, repeat step four such that commands that fail are accounted in the /etc/sudoers file.

At this point, one might wonder, “Why not just share a static list of ssh commands with customers?” The reason is two-fold. First, we routinely add new commands to our plugins, so there is a risk of a static file going stale. And second, we don’t always know if a command will require admin privileges across a wide variety of operating systems.

In this blog post, we demonstrated how a user can create a tailored Nessus scan account to perform authenticated scans over SSH with the least privileges required to perform the scan. Currently, the feature is supported on a limited number of OSs, and we expect to roll out support for additional OSs over the next few months. If you have feedback about the feature, please reach out to Tenable™ support. We would love to hear from you.