Researcher identifies a zero-day vulnerability that bypasses a fix for CVE-2019-16759, a previously disclosed remote code execution vulnerability in vBulletin. Attacks have already been observed in the wild.

Update August 17, 2020: The Title, Analysis and Identifying Affected Systems sections were updated to include reference to the assigned CVE identifier, CVE-2020-17496.

Today I released my research on vBulletin5 including a new pre-auth 0day RCE exploit https://t.co/m7pd527lCr

This is the second notable vBulletin vulnerability for which Etemadieh has developed a proof of concept (PoC) this year. In May, Etemadieh conducted a patch analysis for CVE-2020-12720, an unauthenticated SQL injection vulnerability that was disclosed by security engineer, Charles Fol.

In a blog post, Etemadieh found that the patch for CVE-2019-16759 was insufficient and did not account for issues present in the ‘widget_tabbedcontainer_tab_panel’ template. According to Etemadieh, the tabbedcontainer_tab_panel template widget is capable of loading “a user controlled child template,” which places a value into the widgetConfig variable, effectively bypassing the patch for CVE-2019-16759.

Tenable Research has tested the proof of concept from Etemadieh and confirmed successful exploitation using the latest version of vBulletin.

According to Jeff Moss, founder of the Black Hat and DEF CON conferences, attackers targeted the DEF CON forums “within three hours” of the vulnerability being disclosed.

A new VBulletin Zero Day got dropped yesterday by @Zenofex that revealed the CVE-2019-16759 patch was incomplete - within three hours https://t.co/LwbPuEoL5b was attacked, but we were ready for it. Disable PHP rendering to protect yourself until patched! https://t.co/7JtmEzcTFG pic.twitter.com/R4AcCoZt1B

CVE-2019-16759 was also quickly utilized by attackers soon after it was made public. Attackers managed to breach the Comodo forums at the end of September 2019. Because this latest zero-day is a bypass for CVE-2019-16759, we anticipate attackers will be able to easily leverage it against vulnerable sites until a patch is made available. Even once a patch is available, we expect many sites will remain vulnerable for quite some time.

A PoC for this vulnerability was shared in Etemadieh’s blog post. However, the code snippet is so small that it also fits in Etemadieh’s tweet about his discovery.

All other versions of vBulletin prior to the 5.6.x branch are considered vulnerable. Users should migrate over to a patched version as soon as possible.

If patching is not feasible at this time, there are a few interim solutions. The first is to disable PHP widgets in vBulletin. This can be achieved by toggling the “Disable PHP, Static HTML, and Ad Module rendering” option to “Yes” in the administrator control panel.

This setting can be found under the “General Settings” option under the “Settings” menu by selecting the “Options” dropdown menu item.

Additionally, the initial vBulletin discussion thread about this vulnerability includes another solution to mitigate this vulnerability. Wayne Luke, a technical support lead at vBulletin recommended removing the widget_php module altogether. This can be done by setting the vBulletin site into debug mode and navigating to the Style Manager. From there, you can edit the "MASTER" style template and remove the widget_php module. This suggestion also applies to vBulletin users running the 5.6.3 beta.

Please note that the suggested mitigations could impact certain functionality on your vBulletin sites. This is why it is recommended to upgrade to a patched version as soon as possible.

The advisory for this vulnerability notes that the PHP module will be “removed from the software completely in 5.6.4.”

As noted earlier, while the DEF CON forums were recently targeted by attackers, they proactively disabled PHP rendering until a patch became available. Tenable’s Security Response Team strongly encourages forum administrators and website owners to consider applying this mitigation until the patches can be applied. 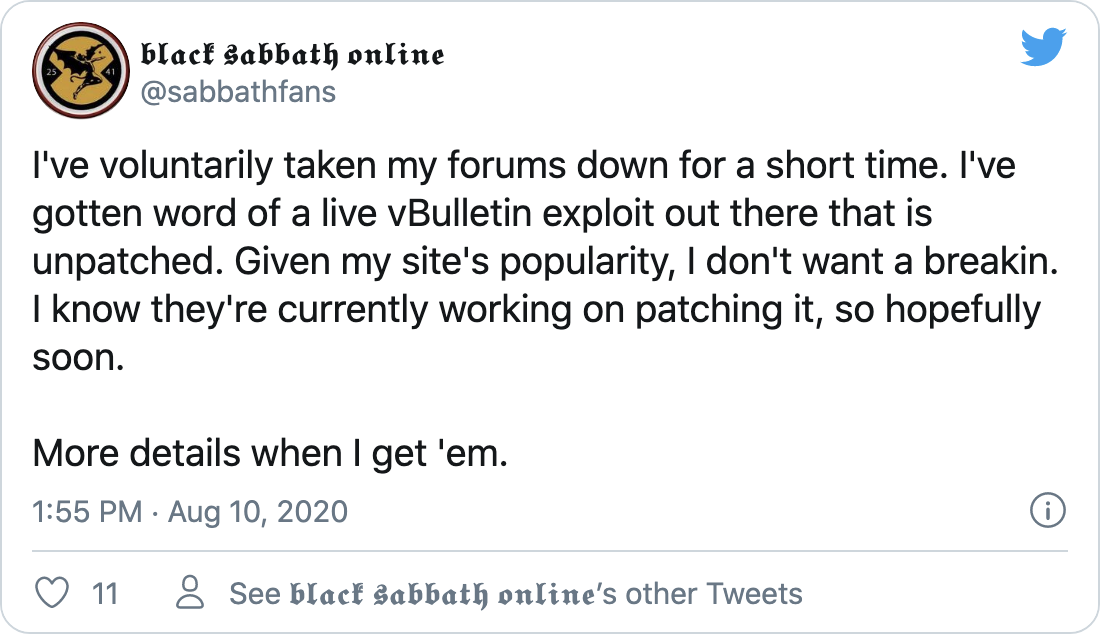 A list of Tenable plugins to identify this vulnerability will appear here as they’re released. The following image contains sample output from a vulnerable target using our Nessus plugin.

Researchers at Positive Technologies have published a proof-of-concept exploit for CVE-2020-3580. There are reports of researchers pursuing bug bounties using this exploit. Background On October 21...
Claire Tills
June 24, 2021