The Vulnerability Intelligence Report, released today by Tenable Research, provides an overview of current vulnerability disclosure trends and insights into real-world vulnerability demographics in enterprise environments. Here are three highlights from the report.

Because vulnerabilities are the fulcrum for everything we do at Tenable Research, the state of the vulnerability ecosystem is of particular interest to us.

Understanding what vulnerabilities really exist requires insight into end-user behavior and telemetry, something unique to Tenable Research. We know what the live vulnerability population is. Out of the 107,710 distinct CVEs published since 1999, 22,625 (23 percent) actually exist in enterprise environments. That’s the true vulnerability ecosystem. The remainder have gone extinct or are hiding in the digital equivalent of Lake Vostok.

Effective threat and vulnerability management is now dictated by scale and complexity, volume and velocity - the scale and complexity of distributed, mobile and heterogeneous networks and users, the volume of resulting vulnerabilities, and the velocity with which new vulnerabilities are disclosed and exploited in the wild. More than ever, this requires actionable intelligence. We’re not exempt from this requirement here at Tenable Research, and we practice what we preach. The result: our Vulnerability Intelligence Report. And because we believe in full disclosure and intelligence sharing, we are sharing it with our community.

You can grab a copy of the report here. In the meantime, I’d like to discuss three things that really stood out to us in Tenable Research:

CVSS version 3 was introduced in 2015, and was intended to resolve some limitations in how version 2 assessed the impact of a vulnerability, amongst other changes. While version 3 scores are rarely available for older vulnerabilities, most vulnerabilities from 2016 onwards have begun receiving CVSSv3 scores. Feedback from the field and third-party reports have noted weaknesses in version 3 since its release. Our own analysis supports the critique, showing that CVSSv3 scores the majority of vulnerabilities as High and Critical.

As Figure 1 shows, CVSSv2 scored 31 percent of CVEs as High severity, versus 60 percent with High or Critical severity under CVSSv3.

Used on its own, CVSSv3 aggravates, rather than resolves, the prioritization challenge. Before this is interpreted as an endorsement of using CVSSv2, the original cause for adopting version 3 still remains - version 2 does not reliably reflect the risk that a vulnerability represents to other system components.

In the second section of the report, we look at vulnerability prevalence - vulnerabilities that actually exist in enterprise environments - by analyzing the data from over 900,000 vulnerability assessment scans conducted between March and August 2018. We also drilled down into Web Browser and Application vulnerabilities, due to their inclusion in Exploit Kits, and other client-side attacks. What immediately stood out for us? Many of the vulnerabilities enterprises are detecting are in old or legacy software.

As you can see in Figure 3, there is a similar phenomena for Microsoft Office and Oracle Java.

There may be reasonable business justifications for retaining legacy systems and software. Java, especially, is known to cause challenges due to version dependencies. In those cases, the vulnerable systems can be segmented, or the software can even be installed on a virtual system and only started on an as-needed basis. Without a legitimate business reason though, these applications represent an avoidable residual risk.

Exploitability is insufficiently used as a prioritization criteria

The information is available to most end users in their VA solution, and is automatically operationalized by correlating exploitability data with detected vulnerabilities.

When we analyzed the 609 distinct High severity application vulnerabilities in our data set, we discovered the majority of missing security updates fixed vulnerabilities for which public exploits are available. As you can see in Figure 4, public exploits are available for a whopping 79 percent of the missing security updates that address High severity Adobe Flash vulnerabilities and were detected as missing by enterprises in their environments. For Adobe PDF, the figure is 96 percent. Considering that Flash-enabled content on the internet has steeply declined and will be unsupported as of 2020, there is little value in keeping Flash installed. It does, however, represent a huge residual risk. The lowest percentage in any application group of missing security updates addressing a vulnerability with a public exploit available in the dataset was 41 percent. 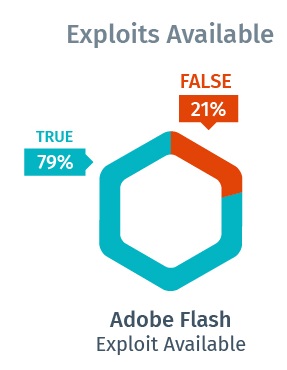 Considering how useful exploitability is as a criteria to evaluate whether a vulnerability represents an acute risk, and that the information is widely available, this finding surprised us. There is definitely a need for raising awareness in the community for this simple, but effective prioritization criteria.

These are just three of the key findings that caught our attention. You can read the full report here.

Cut Through the Marketing Hype: Determine Which Vulnerability Assessment Tool Is Right for Your Organization

Not all scanning solutions are created equal… The vulnerability assessment market has changed dramatically over the past several years. A growing number of vendors who once provided scan tools that...
Jeff Aboud
July 14, 2021