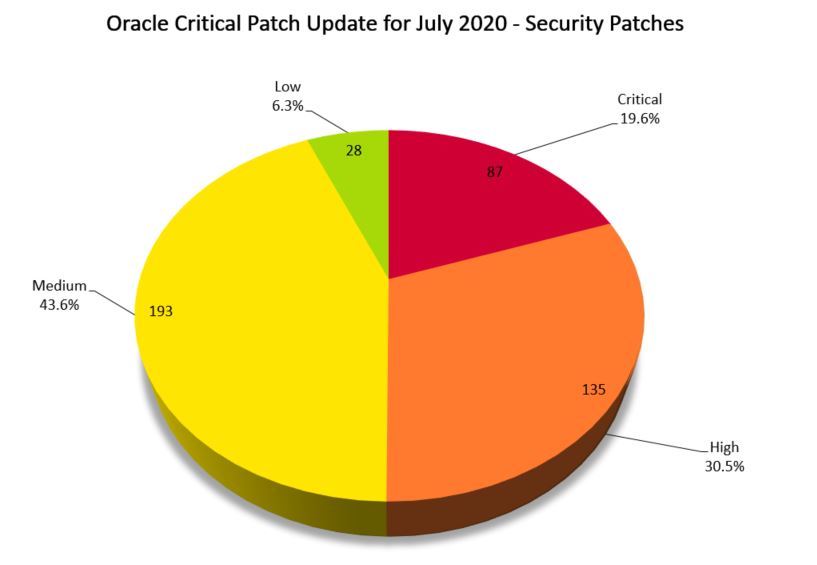 This quarter’s CPU includes more than 30 critically rated CVEs across a wide range of Oracle products. The following is the full list of product families with vulnerabilities addressed in this month’s release along with the number of patches released and vulnerabilities that are remotely exploitable without authentication.

Considering the large number of patches released in this quarter’s CPU, it may be hard to digest, filter and prioritize these vulnerabilities. However, a few notable vulnerabilities stand out due to their criticality and potential for being targeted by attackers.

CVE-2020-14701 and CVE-2020-14706 are vulnerabilities in the User Interface component of the Oracle Communications Applications SD-WAN Aware and SD-WAN Edge products respectively. Oracle has highlighted these vulnerabilities as “easily exploitable” as they allow an unauthenticated attacker with network access via the Hypertext Transfer Protocol (HTTP) to compromise SD-WAN Aware and SD-WAN Edge.

Successful exploitation of these vulnerabilities would result in a complete takeover of SD-WAN Aware and SD-WAN Edge. While the vulnerabilities are in these products, Oracle has noted that “attacks may significantly impact additional products.” These are the only details currently available from Oracle, though the company has assigned both vulnerabilities a CVSSv3.1 score of 10.0, the highest score possible, suggesting easy exploitability with potentially significant impact, making them important vulnerabilities to prioritize.

CVE-2020-14625, CVE-2020-14644, CVE-2020-14645, and CVE-2020-14687 are vulnerabilities in the Core component of the Oracle WebLogic product of Oracle Fusion Middleware. Oracle has highlighted these vulnerabilities as “easily exploitable” as they allow an unauthenticated attacker with network access via Oracle’s T3 and Internet Inter-ORB Protocol (IIOP) to compromise the server.

Customers are advised to apply all relevant patches provided by Oracle in this CPU. Please refer to the July 2020 advisory for full details.