Thirteen new vulnerabilities have been discovered in the Nucleus TCP/IP stack used in potentially billions of devices.

Four of the highest severity vulnerabilities (CVE-2021-31886, CVE-2021-31887, CVE-2021-31888, CVE-2021-31885) are the result of having a file transfer protocol (FTP) or trivial FTP (TFTP) server enabled. FTP is an insecure protocol which lacks encryption or secure authentication mechanisms. Typically found in legacy applications, FTP can open up an organization to significant risk.

The official statement is that the Nucleus RTOS is used by over 3 billion devices. However, exact counts are hard to determine for TCP/IP stacks, as we’ve seen in the past. Forescout attempted to identify systems advertising banners that indicate the use of Nucleus FTP server or Nucleus RTOS with Shodan as shown in the image below. 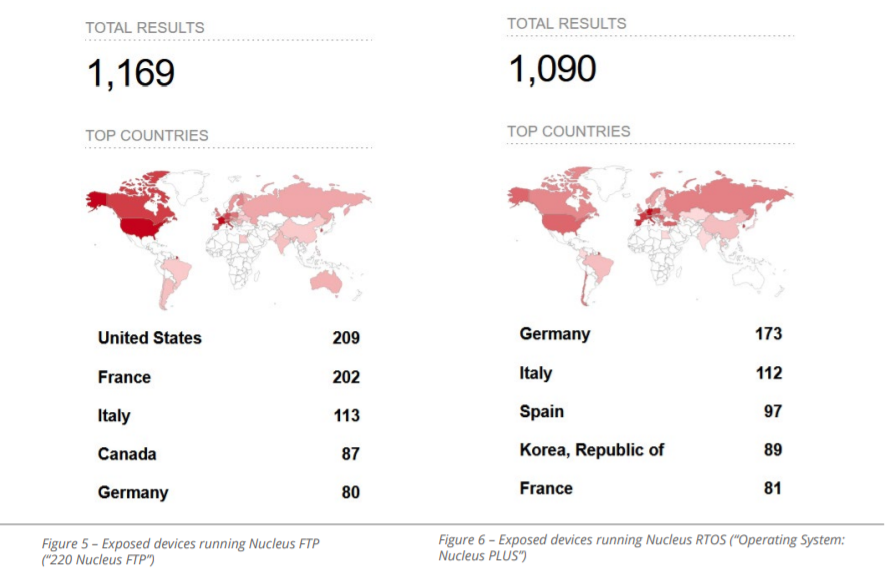 At the present time, no direct proof-of-concept (PoC) code exists for these vulnerabilities. However, the technical details in the report provide sufficient details for testing and exploiting some of the vulnerabilities, including CVE-2021-31886. In addition, Forescout has published a video demonstrating the impact of successful exploitation.

Due to the various implementations of the RTOS, it’s possible that not all attacks will have the same impact on the various devices running affected versions of Nucleus. Any PoC code or exploit scripts are likely to be context dependent.

At this time, Siemens, who owns Nucleus, has released patches for all of these vulnerabilities. Although the patches have been released, device manufacturers and vendors who have implemented the TCP/IP stack or RTOS will need to release updates for affected products. This could mean major delays in updating and securing these devices. Siemens Security Advisory SSA-044112 contains additional patching and remediation information. Additionally, Forescout offers some mitigation recommendations in its report.

Additional research is ongoing and a list of Tenable plugins to identify these vulnerabilities will appear here as they’re released.