Researcher discloses privilege escalation zero-day in Microsoft’s Data Sharing Service on Twitter and provides a proof-of-concept that could be used to deploy attacks in the wild. 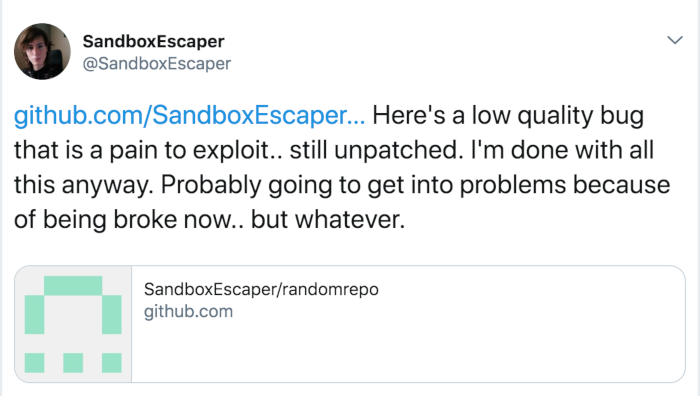 The PoC shared by the researcher deletes files on the system that normally require administrative privileges. By deleting these files, the PoC demonstrates the bug is capable of elevating privileges. The PoC could be modified by an attacker to perform other tasks that require elevated privileges.

Please be advised that the PoC deletes a critical system file which can render the system inoperable.

It is unclear if Microsoft will issue a patch for this vulnerability in time for the next Security Update in November 2018. Until a patch is available, we strongly encourage utilizing best security practices. This includes mitigation strategies, as attackers are likely to use malware when deploying this vulnerability. Additionally, ensure proper access control and network segmentation is in place.

Updated November 14: It appears Microsoft has patched this vulnerability in the November 2018 Security Update. It received a CVE identifier of CVE-2018-8584. While the information does not reference the Data Sharing Service, several indicators including the affected Operating Systems and the impact of successful exploitation lead us to believe that this CVE addresses the vulnerability reported in this blog.

Oracle addresses over 250 CVEs in its second quarterly update of 2021 with 390 patches, including 34 critical updates. Background On April 20, Oracle released its Critical Patch Update (CPU) for...
Scott Caveza
April 21, 2021

Threat actors are leveraging a zero-day vulnerability in Pulse Connect Secure, for which there is no immediate patch scheduled for release. Background On April 20, Pulse Secure, which was...
Satnam Narang
April 20, 2021