On September 25, HP published a security bulletin to address multiple vulnerabilities in HP Device Manager, software that’s used to remotely manage HP Thin Clients. The vulnerabilities were disclosed to HP by security researcher Nick Bloor. As part of a Twitter thread, Bloor warned that a combination of these vulnerabilities would result in “unauthenticated remote command execution as SYSTEM.” On October 5, Bloor published a blog post detailing his findings.

Hey @TheRegister, a HP developer put a backdoor database user account in HP Device Manager which is used to manage HP thin clients. Combined with some other vulnerabilities this leads to unauthenticated remote command execution as SYSTEM.

There were three vulnerabilities in HP’s security bulletin and the table below lists the assigned CVE identifiers and CVSSv3 scores:

CVE-2020-6925 is a weak cipher implementation vulnerability, which means dictionary attacks may be possible against locally managed accounts in the HP Device Manager. HP notes that this vulnerability is mitigated by the use of Active Directory authenticated accounts.

MD5 hashes have been deemed unsuitable for years. Since 2009, the CERT Coordination Center has advised against the use of MD5, saying it “should be considered cryptographically broken and unsuitable for further use.”

CVE-2020-6926 is an RMI vulnerability that would allow a remote, unauthenticated attacker to gain access to resources in the HP Device Manager. This vulnerability received a CVSSv3 score of 9.9, the highest of the three vulnerabilities disclosed.

Bloor found that he could inject database queries into the RMI service. Specifically, he identified that the HP Device Manager uses Hibernate, one of several object-relational mapping frameworks. Hibernate offers its own query language, known as HQL. Bloor managed to smuggle Postgres injection payloads through HQL in order to overwrite the Postgres host-based authentication configuration file (pg_hba.conf) to enable remote authentication. By default, remote authentication is disabled.

CVE-2020-6927 is an elevation of privilege vulnerability in HP Device Manager. According to HP, this vulnerability is mitigated when the integrated Postgres service has not been installed and with the use of an external database, such as Microsoft SQL Server.

During his research, Bloor discovered in the HP Device Manager database (hpdmdb) the presence of a backdoor user account, dm_postgres, which has superuser privileges.

PSA: Do you or your clients use HP thin clients and manage them with HP Device Manager? I strongly advise you, firstly, to log on to all servers running HP Device Manager and set a strong password for the "dm_postgres" user of the "hpdmdb" Postgres database on TCP port 40006 1/4

He was able to crack the password for the dm_postgres user account, which turned out to be a single space (“ “) character.

Utilizing CVE-2020-6926, an attacker can enable remote authentication on the vulnerable HP Device Manager. With CVE-2020-6927, knowing that the dm_postgres user exists within the default installation of Postgres on HP Device Manager, an attacker could authenticate to the database using this account to elevate privileges and execute commands as SYSTEM. Bloor was able to showcase this in the example below by creating a table in the Postgres database to store command outputs that would be executed using a specially crafted query in the context of the Postgres database (SYSTEM). The output from the query results would be written back to the table which could then be retrieved with an additional query. 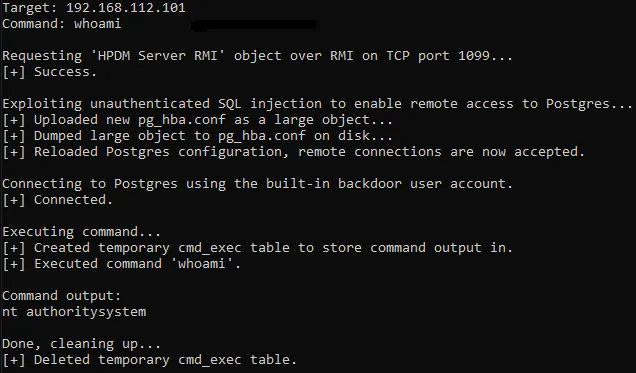 At the time this blog post was published, no proof-of-concept (PoC) was available for any of these vulnerabilities. However, Bloor published a blog post containing details about his findings along with a list of steps required in order to exploit the flaw.

The gory details of the HP Device Manager vulnerabilities: https://t.co/UjaVRxu5Og

If upgrading is not yet feasible at this time, HP suggests applying the following partial mitigations:

The Security Response Team would like to thank Nick Bloor for sharing details with us regarding his findings so that we could develop additional plugins to better protect our customers.