An exploit script for the previously patched Kibana vulnerability is now available on GitHub.

On October 21, an exploit script was published to GitHub for a patched vulnerability in Kibana, the open-source data visualization plugin for Elasticsearch. Elasticsearch and Kibana are part of the popular Elastic Stack (also known as ELK Stack), a series of open-source applications used for centralized log management.

CVE-2019-7609 is an arbitrary code execution vulnerability in Kibana’s Timelion visualizer. The vulnerability was patched in February 2019.

According to Elastic’s advisory for the flaw, an attacker capable of accessing the Timelion application “could send a request that will attempt to execute javascript code” that could result in the attacker executing arbitrary commands on the host under the same permissions as the vulnerable Kibana process.

On October 14, Michał Bentkowski, a security researcher at Securitum, presented a talk at OWASP Poland Day about Prototype Pollution. Bentkowski’s slides from the presentation were published to slides.com, and include his research on CVE-2019-7609, along with proof-of-concept (PoC) code exploiting the vulnerability.

The following table contains information about the vulnerable versions of Kibana based on the information in the Elastic advisory.

A BinaryEdge search reveals more than 4,200 publicly accessible Kibana instances. The most prominent versions of Kibana are vulnerable versions, such as 6.2.4, 6.3.2 and 6.3.1. 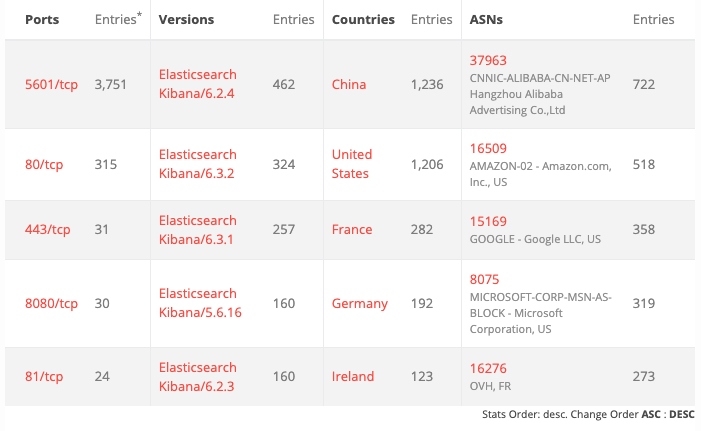 As mentioned, a PoC was published in a slide deck from security researcher Michał Bentkowski and included as part of the exploit script published to GitHub.

Administrators and users of the Elastic Stack (or ELK Stack) should upgrade to Kibana versions 5.6.15 or 6.6.1 and above. However, if upgrading is not feasible at this time, modify the kibana.yml configuration file to disable Timelion by setting timelion.enabled to false.